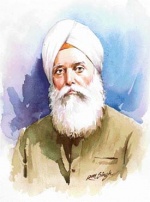 Bhai Kahn Singh, of Nabha (30 August 1861- 24 November 1938), is a celebrated Sikh scholar and encyclopaedia writer, who was born on 30 August 1861 at the village of Sabaz Banera which is about 5 miles from Nabha, in what was then territory of the princely ruler of Patiala. His father was Narain Singh and his mother was Har Kaur.

Bhai sahib did not attend any school or college for formal education as his father arranged for him to study languages including Hindi, Brij Bhasha and Sanskrit and also poetry from Pandits in and around Nabha. So that by the age of 10, Bhai sahib could recite freely both the Guru Granth Sahib and the Dasam Granth.

Of the many literary works among Bhai Kahn Singh's collection, Gurushabad Ratandkar Mahan Kosh (1930), an encyclopaedia of Sikh literature, will remain a permanent monument to his unmatched excellence, industry and erudition.

This Punjabi language encyclopedia is not only the first dictionary of Sikh Scriptures and books on Sikh Religion .....More