From SikhiWiki
Jump to navigationJump to search
Gurdwara Sahib Switzerland 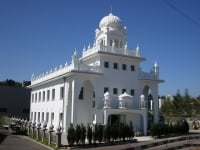 Gurdwara Sahib Switzerland was not built in a few weeks, a few months or even a few years. It took a full decade to build this beautiful Gurdwara in Langenthal, Swiss Canton of Berne in northern Switzerland.

The Sikhs of Switzerland have toiled from 1996 until 2006 for the building to be built. The Sangat started this esteemed project in 1996 when they applied for permission to start construction of Gurdwara sahib. The process of seeking permission took nearly two years.

The foundation stone of Gurdwara sahib was laid on 11th January 2001. The ceremony was headed by Panj Pyara (five beloved). The prominent among the gathering were Singh Sahib Prof. Darshan Singh Ji and Giani Pritam Singh Ji from Damdami Taksal.