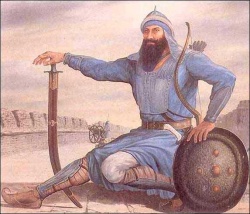 Baba Banda Singh Bahadur (16 October, 1670 - 9 June, 1716) (Lachhman Dev alias Madho dass Bairagi), originally from the Jammu region in Northern India, is revered as one of greatest Sikh warriors as well as a most hallowed martyrs of the Khalsa Army.

The Khalsa were engaged in a prolonged fight against the cruel Mughals, who were practising their tyranny and terrorism. His confrontation with the Mughal administration in Northern India, though brief, was strong and vigorous enough to shake the foundations of this evil empire.

The agrarian uprising that he led in the Punjab was the underpinning on which the Dal Khalsa, the Sikh Misls and Maharaja Ranjit Singh built the edifice which finally culminated with Ranjit Singh capturing Lahore in 1799 and establishing the Sikh Kingdom of the Punjab; that resulted in the end of a dark period in the history of India.

Banda was born in a Minhas Rajput family on October 16, 1670 at Rajouri in the Jammu region of Jammu and Kashmir. He was named Lachman Dev. Wrestling, horseback riding, and hunting were his major hobbies. He was a very active and energetic child. .....More