A tehsil (tahsil, tahasil); also known as taluk (taluq, taluka), and mandal, is an administrative division of some countries of South Asia, particularly [[India and Pakistan.

Generally, a tehsil consists of a city or town that serves as its headquarters, possibly additional towns, and a number of villages. As an entity of local government, it exercises certain fiscal and public administrative power over the villages and municipalities within its jurisdiction. It is the ultimate executive agency for land records and related administrative matters. Its chief official is called the tehsildar or less officially the talukdar or taluka muktiarkar.

Tehsil and taluka and their variants are used as English words without further translation. Since these terms are unfamiliar to English speakers outside of the subcontinent, the word county has sometimes been provided as a gloss, on the basis that a tehsil, like a county, is an administrative unit hierarchically above the local city, town, or village, but subordinate to a larger state or province. However, India and Pakistan have two (or more, at least in parts of India) intermediate levels of hierarchy—the District and the tehsil, both of which are sometimes glossed as county. In neither case is the analogy very precise in specific details.

The term taluka or taluk is used in some States of India, including Gujarat, Goa, Maharashtra, Kerala, Tamil Nadu, and Karnataka, and tehsil in others, such as Punjab, Haryana, Uttar Pradesh, Uttarakhand, Himachal Pradesh, Madhya Pradesh and Rajasthan. Andhra Pradesh used to have taluks (with firkas under them), but these have now been replaced with mandals. In addresses the abbreviation TK often appears.

Each taluka or tehsil is part of a larger District within a States of India or Union Territory. In some cases, the tehsils of a given District are organized into smaller groups of tehsils called Sub-Division (Pargana, Anuvibhag).

The governmental bodies called the panchayat samiti operate at the tehsil level. The villages of a tehsil are grouped into smaller clusters known as hobli.

The head of a taluk is given the title Tahalsidar. Tahalsidars are charged with the administration of their taluk and report directly to the Deputy Commissioner of the district. 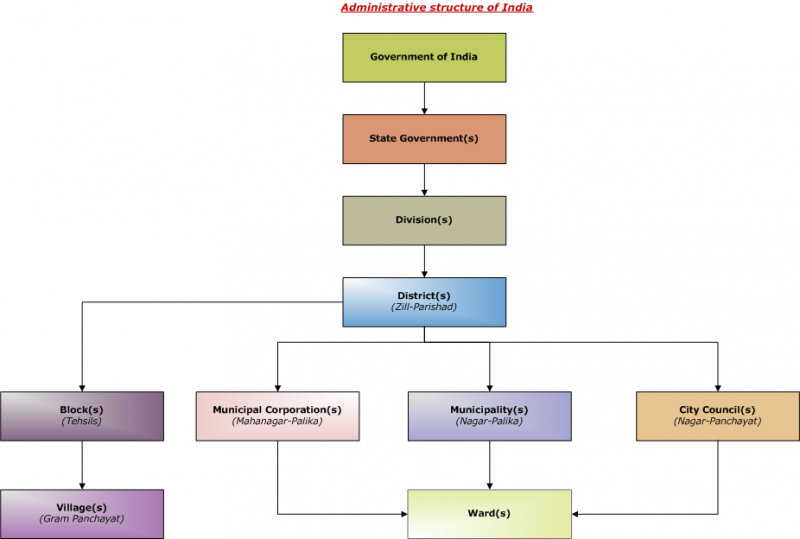 Municipal setup by state in India