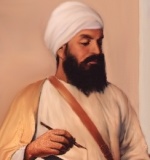 He was the son of Bhai Deva Singh and Mata Rajadi, professional cloth printers of Nurdin village, also known as Sarai Nurdin, 7 km northwest of Tarn Taran in Amritsar district of the Punjab, India.

His father, though poor, was educated and well versed in the sacred texts. He sent his son, after preliminary education at home, to Amritsar where he became a pupil of Giani Sant Singh (1768 - 1832), a renowned man of letters and custodian of Sri Darbar Sahib.

After having studied Sikh Scripture and history, Sanskrit language and literature, poetics, philosophy and mythology at Amritsar for about 15 years, Santokh Singh moved to Buna, an old town on the right bank of the Yamuna in the present Yamuna Nagar district of Haryana, some time before 1813.

There he established himself as a writer, poet, and preacher. .....More