From SikhiWiki
< SikhiWiki:Today's featured article
Jump to navigationJump to search
The tragedy of 1984 main attack on 6 June 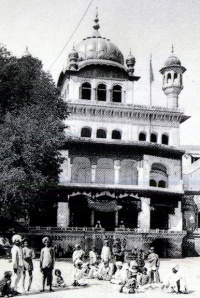 On June 1,1984, my brother Surinder and I were moved out of Punjab as the borders were being sealed and a curfew was declared in Punjab. Further, there was a news blackout. That only meant we had to infiltrate and see exactly what was going on.

So after two weeks, we set off in disguise. Upon approaching Amritsar, the truck we were riding in was waved to a stop and all of us were ordered out. I had already fastened my tape recorder with gaffer's tape to the small of my back. And I had tucked my 16mm Bolex camera into a filthy old jhola (cloth bag). When I raised my arms, a soldier patted me down but missed the tape recorder, and when he spun me around, I shifted the jhola quickly so he didn't see it under my shawl, and off we went to see what destruction Mrs. Gandhi had created.

Tanks and submachine guns and barbed wire greeted us at the Golden Temple. We circled around to the medieval streets in the back. Crooked winding lanes were dotted with Gurkha Regiment guards, imported because their foreignness would imply that they would not be taking sides in what was clearly the most traumatic event to have taken place in our lifetime in India.

"The police hacked off the arms of people and we collected their torsos in gunny sacks," said one of the residents who dared to greet us in the empty streets. He spoke in Punjabi, into my tape recorder. For half an hour, we interviewed him as he described the utter carnage of three days of gruesome battle that is now known with the rather beautiful name Operation Blue Star.