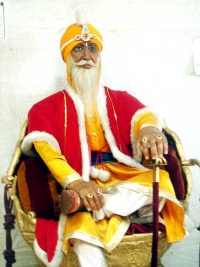 The early years of the 19th century witnessed the power of the Durrani declining.

Maharaja Ranjit Singh was encroaching the Afghan Kingdom and the Maharaja was eager to avail himself of any opportunity to snatch the rich province from the Durranis, the rulers of Afghanistan.

An opportunity came to Maharaja Ranjit Singh, when he annexed Attock in 1813 from the Afghans. But his initial attempts of 1814 and 1815 to seize Kashmir failed miserably. But then another opportunity arrived in 1819 when a Kashmiri Pandit, Birbal Dhar, a revenue collector of the Valley under the Afghans, escaped first to Jammu and then to Lahore and urged the Sikh ruler to free the Kashmiris from the Afghan’s oppression.

Sikh forces under the command of Missar Diwan Chand and properly guided by Birbal Dhar and Mian Gulab Singh invaded the Valley in 1819 A.D. Jabbar Khan the acting Governor of Kashmir collected his troops and faced the Sikh army but he failed to stop the onslaught of the Sikh forces. .....More