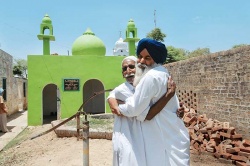 Proud Ghuman Sikh family of Sarwarpur, near Ludhiana, cannot understand what the fuss is about. Ever since Sajjan Singh Ghuman, an NRI Sikh living in England, rebuilt a mosque in his native village that was damaged during Partition, the shrine, as well as his family back home, have attracted the curiosity of outsiders. "We never imagined we would be on a Punjabi TV channel just because my elder brother rebuilt this small mosque for the poor Muslim families of our village".

"For him, it was just a gesture towards restoring the collective heritage of our village,” says Sajjan’s brother, Joga Singh, who manages the family’s lands in Sarwarpur. Sure. But what Joga and his family, or even the TV channel, do not know is that the sentiment that inspired his brother’s act is being manifested in scores of villages across Punjab, with Sikhs and Hindus joining hands to either rebuild old and damaged mosques or build new ones. Odd? Perhaps. But Punjab, as admirers of its unique religious synthesis say, has always defied stereotypes to do its own thing.

In fact, soon after 1634, the sixth Sikh Guru, Guru Hargobind built a mosque, now called Gurdwara Guru ki Maseet for the local Muslims living in Sri Hargobindpur town at the time. The present building which was restored in 2002 is recognized as a historic site by UNESCO and Muslim prayer - Namaz was again performed at the handover ceremony held on April 23, 2002.

That spirit comes through clearly in the actions of a group of school and college boys from 600-year-old Ajitwal village near Moga. During Partition, when Muslims fled Ajitwal, just as they fled in waves from other parts of Punjab, an ancient village mosque was vandalised. As years passed, someone encroached on its grounds and the place became a village dumping ground. A neem tree on its compound became a hang-out for the village youth.

One day, a bunch of boys decided to clear the muck. Within days, the entire village — now made up of Hindus and Sikhs—joined them. Says 20-year-old Laddi: “We were never short of money or material. Anyone who passed this way would contribute in cash or kind. Someone brought five bags of cement, another donated bricks and so on....”

This, when there were no permanent Muslim families left in the village. But, once repaired, the mosque began to be used. A few Muslim migrants from Uttar Pradesh and Bihar, labourers and petty tradespeople, began praying here. A maulvi from a neighbouring village now comes to conduct Friday namaaz.

To the delight of 80-year-old Nachattar Kaur, who was born and brought up here, the sound of the azaan (call to prayer) is being heard again, after decades. “We have always believed in this shrine,” she says. “It is a house of God. God bless these boys for restoring the oldest relic of our village.”

This is only happening in Punjab

In Malerkotla, the headquarters of the state unit of Jamaat-e-Islami (Hind), publisher and Jamaat member Ramzan Sayeed, who has also translated the Quran into Punjabi, observes, “It is only in Punjab that Sikhs and Hindus are helping to build masjids with tractors, labour and money.” That this should happen at a time when Islamists are being reviled and resisted across the world makes it remarkable; and that it should be happening in a land where the soil is soaked with the blood of Partition, and stories of murder, rape and looting have been passed down the generations, renders it especially significant.

In the months after Partition, some 50,000 mosques across present-day Punjab, Haryana and Himachal Pradesh were destroyed, burnt or converted into temples and Gurdwaras—homes, even. Today, Muslims comprise just 1.5 per cent of Punjab’s population, mostly migrant labour from UP and Bihar and some Gujjar families from Jammu and Kashmir who have settled here, in addition to small pockets of Muslims, such as those belonging to Malerkotla, who did not go to Pakistan in 1947.

Not mere mortar and bricks Students of Ajitwal village, near Moga, rebuilt the ancient masjid, However, in the last decade or so, the Jamaat has managed, with extraordinary village-level support, including money and materials, to free and revive about 120 mosques. Scores of others, like the one at Ajitwal, have been revived or rebuilt purely by villagers themselves.

Another Majid rebuilt in Diwa Gandwan

Jamaat president Arshad Ali told Outlook, “We consciously involve Sikhs and Hindus whenever we help build a new mosque or repair an old one; and every time, the community’s response is overwhelming.” He reels off the names of scores of villages where this has happened. One of them, Diwa Gandwan in Fatehgarh Sahib, has only 17 Muslim families, most of them poor labourers.

Mohammed Jameel, a farm labourer who lives in the village, told Outlook, “We never imagined we could have a masjid of our own, but we do now. It would not have been possible without the help of the Sikh landlords here, who filled up the low-lying area by bringing us earth in their tractor trollies.” The first brick of the mosque was laid by a Sikh priest from Fatehgarh Sahib, who also donated money.

Arshad Ali contrasts this attitude with the one that prevailed when he began working for the Jamaat in Punjab some 30 years ago: “We used to face opposition whenever we tried to assert ourselves. But all that has changed now. Our effort to construct masjids is helping foster religious brotherhood in Punjab.”

Muslims were afraid even to mention it

Hassan Mohammed, the imam of the Jama Masjid at Mandi Gobindgarh, recalls that last year, when he tried to mobilise Muslims of Jhampur village to rebuild their village mosque, they were afraid of even the suggestion. He then approached the sarpanch, a Jat Sikh, who immediately got a few boys to clear the overgrown area. Other villagers chipped in with contributions in cash and kind and, soon, what was once a crumbling ruin became a vibrant place of worship. Such stories abound in rural Punjab today.

There are no clear-cut answers for why this is happening. It helps, clearly, that Muslims are only a tiny, largely poor, community here, no threat to anyone, and that sympathy for the underdog is a distinctive Punjabi— especially Jat Sikh trait. But that’s only a partial explanation, as is the other obvious one — that this is a manifestation of collective guilt over the atrocities committed by Sikhs and Hindus against Muslims during Partition.

Guilt could be a factor, acknowledges Sikh historian and writer Prof Gurdarshan Singh Dhillon, “There is no doubt,” he says, “that the atrocities of Partition are a blot on the history of the Sikhs. We, as a martial race, are not supposed to attack the weak and unarmed, but it happened, and ever since then, there has been remorse.”

He recalls how a few years before his death, Gurcharan Singh Tohra, long-time president of the Shiromani Gurdwara Prabandhak Committee (SGPC), confessed that he too had killed a Muslim during the Partition riots and felt haunted by his act. Possibly to atone for the act, Tohra constructed a mosque in his native village and laid its first brick with his own hands.

Sikh desire for a secular state

On the other hand, much of the present effort to revive mosques is coming from a generation that does not have the blood of Partition on its hands; one that has witnessed and endured, rather, the violent Sikh separatism during the ’80s. That’s why Pramod Kumar, director of the Chandigarh-based Institute of Development and Communications, feels this is “the collective reassertion of Punjab’s unique cultural synthesis” and “an attempt to build a secular Punjabi identity, as opposed to a communal identity or religious one”.

But predictably, radical Sikh scholar, Prof Gurtej Singh, takes a different line: “This is an instinctive manifestation of the Sikh’s disillusionment with a Hindu-dominated Indian state that has done all it can to obliterate Sikh identity. During Partition, we were made to believe that Muslims were our enemies and we massacred them in large numbers. We have now realised that not Muslims, but Hindu-dominated parties like the BJP are the real threat to our identity.”

Pointing out that Sikhs and Muslims have gradually come to value each other, he relates an anecdote about Shia Muslims recently discovering how Sikhs protected one of their shrines in Samana in Punjab, and how they are returning the gesture by helping Sikhs build Gurdwaras in the Gulf. He also lauds Pakistan for enacting a Sikh Marriage Act which he helped draft, whereas India is yet to do so. “These things,” he says, “accumulate in the popular psyche, and manifest themselves in various ways”.

But try telling 67-year-old Kesar Singh or 24-year-old Kamal Vohra that this is only a story of Sikh-Muslim 'bhaichara' (brotherhood). Kesar, a Jat Sikh farmer from Ratia, some 15 km from Dhuri, a Hindu-dominated town in Sangrur district, and Kamal, a Hindu whose family migrated from Sialkot in Pakistan, have slogged shoulder to shoulder for days to rebuild Dhuri’s lone mosque.

Kesar admits to a special bond with the mosque, which he visits every week, along with 20 other Sikhs of Ratia, for Friday namaaz. “The old imam has been my friend for the last 50 years and I enjoy his liberal interpretation of the Quran,” says he. But when the old mosque was demolished to make a bigger structure, it wasn’t just Sikhs but the entire Hindu mohalla that helped dig the foundations. Hindus and Sikhs from nearby villages, too, contributed with hefty donations. As always, Punjab never fails to surprise.