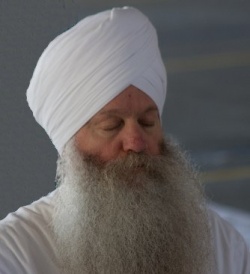 A Sikh in deep meditation

Sikh Yoga is one of the original empowering practices of the Sikhs; the ability to able to achieve deep meditation and the concept of detachment from the world are the more popular vision of yoga which do not give a full and balanced view of yoga. "Yog" and "yogi" (or jogi) have been repeatedly mentioned in Gurbani, but in the traditional Sikh world, these things are little known or understood. The study of this subject is mostly ignored in the historical sections of Sikhi mostly out of prejudice for it. We will be able to understand the related Gurbani better by knowing more about what Gurbani says about this topic.

The word 'Yog' means 'union with God', and this science is a technique of attaining this union. It was originally organized by Patanjali Rishi, more than four thousand years ago, about the time of Sri Krishan (Krishna). He close to divide yoga into four principal categories; these divisions are mostly imaginary to make the subject easy to understand. Practically, they have no strict partitions and smoothly merge into one another, and the practitioner applies all the four of them at the same time, at least to some extent, to learn and practice the techniques of Yoga.

According to Gurbani, many of the practises of yoga are compatible with Sikhi. This is readily depicted in the Vars of Bhai Gurdas, considered the key to a full understanding of Gurbani. However, many traditional Sikhs find this difficult to accept. Bhai Gurdas ji says in simple Gurmukhi:

The Gursikh Yogi is fully awake within the sea of worldly attachments, called Maya; despite this sea of illusion, the Sikh yogi (or jogi) is completely alert and in full control of his senses.

Today, confusion exists, over the use of yoga, because of the considerable amount of Gurbani which condemns the self-torturing, aloof and ignorant practices of many of the yogis of Guru Nanak’s time. In all, about forty percent of Gurbani relating to yoga is in this vein. Gurbani, deals with both the pure concepts of yoga which are accepted and the negative practises of the "recluse yogi" which are not in keeping with Gurmat.

Gurbani in support of body-affirming, socially engaged and enlightened yogic practice may be said to take three forms. In the first form, Gurbani talks about God as a Supreme Yogi; in the second, the True Guru is depicted as a yogi and guide to lead a person to higher conciousness; and finally Gurbani speaks about a personal experience of samadhi (intense and deep meditation).

God is himself the Yogi, staff-bearer,
God himself is the pervading lover of forest, field and land.
It is God who subjects himself
To spiritual ordeals and fixes his mind in prolonged meditation.

The second form depicts the True Guru as Yogi. Typically:

The third type of Gurbani conveys the personal experience of samadhi, ultimate yogic realization. An example of the many verses in this mode would be:

The body of six chakras is the abode of the detached yogi mind.
My inner essence is awakened to the sound of the word,
My mind absorbed in the resonance of the celestial sound.
By the Guru’s Teachings, my consciousness is filled with the True Name.

Some Sikhs who want to retain their distinctive identity, may consider yoga to be a Hindu practice. Confuting such popular prejudice, Siri Singh Sahib Harbhajan Singh Khalsa Yogiji, commonly known as Yogi Bhajan propagated essential Sikh teachings and Gurbani through the methodology of Sikh Yoga.

Now, what is Yoga, after all?

(1&2) Guru Nanak’s discipline also includes dos and don’t, many of them stated or implied in Gurbani. (3) Anyone who attends a Gurdwara will immediately see the postures practiced therein: erect with hands folded when presenting oneself before Siri Guru, forehead to the floor in prostration, then cross-legged on the floor in contemplation. The ceremony of Khalsa initiation adds to this short list, the posture of veeraasan – sitting on one heel, with the opposite knee in front. (4) Pavan (breath) shares the distinction with Shabad of being ordained as Guru by Guru Nanak himself, who in Sidh Gosht taught the reclusive yogis how to breathe.

When the mind abides in a steady heart,
Then, the Gurmukh lives in a constant knowledge of the Origin, the Root of all Being.
Then the breath is centered in the navel.
The Gurmukh finds there the Essence they have been seeking.

(5-7) Lastly, dis-passion and various levels of awareness and enlightenment are richly and evocatively portrayed in Gurbani.

The Gurmukh lives free in the pristine cave of being.
There, using the power of the Shabad, she does away with the five thieves.
Her mind no longer wanders to others’ houses,
But is absorbed in the natural coziness within…
With her mind easily absorbed in the samadhi of the neutral mind,
Abandoning selfishness and greed, she recognizes only the one.
When the disciple’s heart honours the Guru,
O Nanak, then duality is finished and the Guru and disciple are one.

The three pillars consist of tapas (enduring spiritual ordeals), self-study and dedication of one’s efforts to the Supreme. Tapas consists of accepting hardship as purification. The classical Sikh tapas is to rise when it is difficult, in the dark hours of the morning, for meditation. Sikh tradition is replete with stories of great souls who have experienced the grace of God through the hardship of prolonged meditation. In their memory, there are still a number of historic tapasthaans (places of tapas) kept in memory of their ordeals. Self-study, consisting of meditation or simran, and dedication of one’s efforts in service or seva, round out the three pillars.

The Gurmukh who loves God’s Name, recites the Name,
Endures spiritual ordeals and practices self-restraint.
The Gurmukh always meditates on the One Name of the Creator.
O Nanak, meditate on the One Name which is the support of all beings!

Raj Yoga, the practice of living detached, yet fully engaged in the world, is the epitome of Sikh teachings. Gurbani offers no higher praise of Guru Nanak than to say he mastered Raj Yoga.

........Kal, the poet sings the sublime praises of Guru Nanak, who enjoyed the mastery of raj yoga.

Aside from Yogi Bhajan Ji, the best known Sikh Yogis or Tapeeshars (Lords of Tapas) in the 20th century have been Baba Nand Singh Ji of Kaleran, Sant Baba Attar Singh Ji of Mustiana, and Bhai Randhir Singh, all of Punjab.

This picture of a yogi is not to be confused with the "recluse yogis" commonly found in India begging from house to house rubbing ash on their bodies. The Sikh yogi is a disciplined individual focused towards God and Guru; detached from Maya and the material world; compassionate towards the Guru and dedicated to service and self-improvement. The Sikh yogi undertakes Gurbani simran, kirtan singing and understands the need to lead a loving family life.

In summary, Sikh Yoga is life-affirming, socially engaged, and dedicated to the good of all. All Sikhs knowingly or unknowingly, practice it to some degree. Absolutely anyone may practice it.