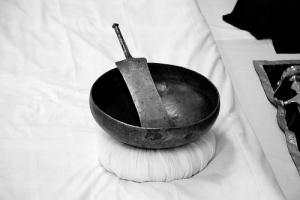 The Sarblohi Khanda Bata (as used in all Amrit Sanchaars)

Sarbloh (wrought iron) is the metal used in the Bata (a bowl or cauldron) used by Guru Gobind Singh Ji to prepare the Amrit during the Khalsa initiation ceremony in 1699. The Khanda (a double edged knife or sword) was also made of Sarbloh. To this day all Amrit Sanchaars are conducted using a bata and khanda made of sarbloh.

Kara and Kirpan (2 of the Five Ks that a Sikh keeps on his or her person at all times) must also be made of Sarbloh.

Sarbloh should not be confused with either cast iron or steel as these metals only came into common use during the industrial revolution of the 19th century.

It is thought that iron was first produced in India, along the Indus river. Possibly trying to reproduce the chunks of metal that are even today found in the world's desserts or lumps of iron produced by lightening strikes (which also produce glass and ignite fires) artisans were producing iron ore mixed with charcoal in ancient forges using forced air (from bellows). First a lump of iron (also called bum steel today) was produced. When enough raw iron had been produced it could be reheated and then hammered out to the shape required; a knife, sword, tool or pan such as a Bata. Artisans in today's Panjab and Gujarat areas were producing carbon laden billets of raw iron that were highly prized by the sword makers in the middle east long before the metal came to be known by the terms Watered or Damascus steel). This 'steel' should not be confused with the steel blades, cars or frying pans of today, made possible by production processes of the late nineteenth century. 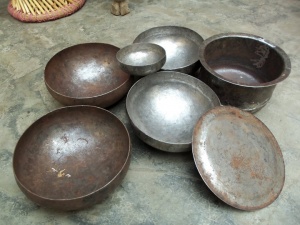 This is the rehit (discipline) of a tyaar-bar-tyaar (ever-ready) Amritdhari Gursikh preparing, cooking, and eating pure vegetarian food made from single ingredients in Sarbloh utensils while reciting Gurbani or Simran. To date this is followed by many devotees in the panthic jathebandis of Akhand Kirtani Jatha and Nihang Singhs.

Videos on the making of Sarbloh

Three videos on smelting iron and producing metals before the nineteenth century: