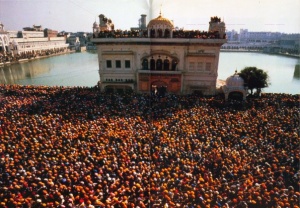 Sarbat Khalsa in 1986 assembled in the open space between the Akal Takht and the Darshani Deori, click for closer view [1].

Sarbat Khalsa (ਸਰਬਤ ਖਾਲਸਾ Sarbat from Sanskrit sarva / sarvatas meaning the whole or entire) is a term with a dual connotation. It is a concept as well as an institution.

In the conceptual sense, Khalsa is the extension of sangat, holy congregation, an institution which has been eulogized in the Sikh Scripture as symbolizing God's Own presence (GG.460,1314, B35). Sarbat Khalsa in this sense is a mystic entity representing the "integrated conscience" of the entire Sikh people imbued with the all-pervasive spirit of the Divine. Guru Gobind Singh transformed Sangat into Khalsa serving God's will or pleasure.

A verse in the Sarbloh Granth, generally ascribed to the Guru, declares:

Sarbat Khalsa as the Guru Panth, along with the Guru Granth Sahib, is held to be the true and eternal spiritual successor in the line of personal Gurus ending with Guru Gobind Singh.

Sarbat Khalsa is mentioned in the daily Panthic Ardas as follows:

In the other, historical, sense, Sarbat Khalsa is the highest organ of the Khalsa Commonwealth representing its "integrated will," which no Sikh commoner, sardar or prince could dare defy. Sarbat Khalsa, meeting in the presence of the Guru Granth Sahib, is the supreme sovereign body, with deliberative and executive powers, including authority to direct the affairs of the community. The institution of Sarbat Khalsa grew out of the needs and compulsions of the turbulent eighteenth century when Sikhs, were driven away from their homes and were forced to find shelter in remote hills and forests in large or small batches. The able-bodied baptized Singhs among each group formed a fighting band, living off the land in defiance of the imperial might. It became customary for these bands of Sikhs to assemble yearly at Amritsar, especially on the occasions of Baisakhi and Diwali. These gatherings of warriors and noncombatants who were soon considered to represent the entire Panth came to be known as the Sarbat Khalsa. In this general sense, Sarbat Khalsa denoted, as it still does, the entire body or the whole commonwealth of Sikhs in whose name ardas or the supplicatory prayer was offered individually or at public congregations.

The Sarbat Khalsa discussed and took decisions by common counsel upon matters of policy and upon matters requiring action. Reports on the activities of different jathas or groups were taken note of and strategies in respect of their continued resistance against Mughal and Afghani oppressors who sought their conversion to Islam, as well as their relationship with friendly powers such as the Jats and the Marathas. The earliest known meeting of the Sarbat Khalsa took place on the occasion of Divali in 1723 when a clash between Tat Khalsa and the Bandais (owing fealty to Banda Singh Bahadur) was averted and amicably settled through the intervention and wise counsel of Bhai Mani Singh.

The next notable Sarbat Khalsa, which was held soon after the martyrdom of Bhai Tara Singh of DallVan in 1726, passed a gurmata (the decisions of the Sarbat Khalsa), laying down a threefold plan of action:

Another Sarbat Khalsa assembled in 1733 to deliberate upon and accept the government's offer of a Nawabship and jagir to the Panth. Under a gurmata of the Sarbat Khalsa on 14 October (Divali day) 1745, the active fighting force of the Sikhs was reorganized into 25 jathas (bands) of about 100 each.

A further reorganization into 11 misls (divisions) forming the Dal Khalsa was made by the Sarbat Khalsa on Baisakhi, 29 March 1748. Thus, Sarbat Khalsa became the central body of what J.D. Cunningham, in his book, A History of the Sikhs, terms a "theocratic confederate feudalism" established by the misls.

But as the misl chiefs settled down in their respective territories, with the threat of invasion or intervention from outside eliminated, they began to bicker and fight amongst themselves. Soon the Sarbat Khalsa gatherings became less frequent and less important, as even their make up changed. Whereas formerly all present could take part in the deliberations, now it was only the misl chiefs or their vakils (representatives) who mattered.

With the establishment of a monarchy under Maharaja Ranjit Singh, the institution fell destitute. The last known Sarbat Khalsa assembly took place in 1805 to deliberate upon the question of policy to be adopted towards Jasvant Rao Holkar, the Maratha chief who, defeated by the British, sought refuge and the support of Maharaja Ranjit Singh. Only chosen Sikh chiefs were invited by Ranjit Singh to take part in the convention. Opinions were freely expressed, but the role of the assembly was only advisory, the final word rested firmly with the new sovereign, Ranjit Singh.

Some details about the working of the Sarbat Khalsa have come down to us through the writings of near contemporaries. According to them, the Sarbat Khalsa was invariably convened at the Akal Takht. The participants after ablutions in the holy sarovar and obeisance at the Harmandar Sahib, assembled in the open space in front of the Takht where the Guru Granth Sahib was seated - attended by Akali (Nihang) officiants.

According to John Malcolm,in Sketch of the Sikhs:

“When the chiefs and principal leaders meet upon this solemn occasion, it is concluded that all private animosities cease and that every man sacrifices his personal feelings at the shrine of general good and actuated by the principles of pure patriotism, thinks of nothing but the interests of the religion and the commonwealth to which he belongs. After the prayers (ardas) and distribution of Karah Parshad, the session commenced: Then distinction of original tribes, which are on other occasions kept up, are on this occasion laid aside in token of their general and complete union in one cause. The Akalis then exclaim, "Sardars (chiefs), this is a Gurmata on which prayers are again said aloud. The chiefs after tills sit closer and say to each other, “the sacred Granth is betwixt us, let us swear by our scripture to forget all internal disputes and to be united”. This moment of religious fervour and ardent patriotism is taken to reconcile all animosities. They then proceed to consider the danger with which they are threatened, to settle the best plans for averting it and to choose the generals who are to lead their armies against the common enemy.

In recent years efforts have been made to revive the institution of Sarbat Khalsa to discuss important political issues confronting the Panth but no consensus on its constitution or commonly accepted sanction has so far emerged.