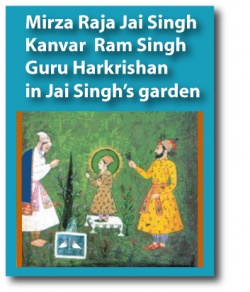 It was in his father's Palace in Delhi that Guru Harkrishan would be stricken with smallpox and die while administering to the sick of the city during the epidemic.

Kanwar Ram Singh had served in the campaigns of his father Jai Singh. In 1654 he had aquired a rank of commander of 3000 (cavalry) in the Mughal nobility. In 1660, after the accession of Aurangzeb as emperor, he led an army against the hill-state of Srinagar. Jai Singh took his younger son Kirat Singh on his last campaign to the Deccan (1664-67) leaving Ram Singh to be his representative at the Mughal court. When Jai Singh sent the Maratha hero Shivaji to meet Aurangzeb (1666), he took an oath to be responsible for his safety at the Mughal court, and made Ram Singh Shivaji's caretaker.

Shivaji's antics at Auranzebs Court had angered the Emperor (he felt slighted when he noticed he was placed in a position in court behind people he thought he was superior too and pitched a fit).

Kanvar Ram Singh was able to keep him from Aurangzeb's dugeons by signing a bond for the Maratha hero while he held him captive at his camp at Agra. After months as a prisoner of the Princes hospitality, Shivaji sensing that his torture or death was near began to send out large baskets of sweets to charity.

You notice how, when you have lost something, you always find something in the last place you look!

Well, after some time the guards grew lax and quit inspecting the baskets. One day soon both Shivaji and his son Shambaji went missing. They were no where to be found for they had been in the last place the guards should have looked — the last two baskets of sweets found just outside the camp with considerably less sweets inside. Of such tales legends are born while others are made to pay the piper.

So as it was suspected that Ram Singh had allowed Shivaji's escape to honor the oath taken by his father. Ram Singh's rank was reduced by 1000 soldiers, his jagirs were taken away, and he was banished from the Mughal court. Later the Kachvaha prince was permitted to re-enter the court and his jagirs were restored in March of 1667. 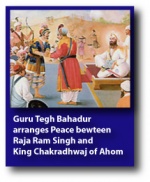 His father Mirza Raja Jai Singh, whose invasion of Bijapur was not going well, was called to Aurangzeb's court to explain the escape; he passed away in route. So it was that Kanvar Ram Singh was annointed in the last Tikka Celebration that Aurangzeb would ever perform. As a punishment the new Raja of Amber, was sent by Aurangzeb to quell a rebellion by the Ahom chief Chakradhwaj in far off Assam. Now Assam was a difficult country to operate in and far from lines of supply and help and support from the Mughals was held back, so Raja Ram Singh requested the assistance of his friend Guru Tegh Bahadur.

Guru Tegh Bahadur's presence was a moral booster to both Ram Singh and his troops. The Guru's role, however, proved to be much more essentual to the results than his mere presence. Pacifist that the famed Guru was, his efforts were essential in the peace agreement which was soon concluded between the former enemies. It was on this trip that the Guru, who was also building a Gurdwara in memory of Guru Nanak's earlier trek through the region. It was during the Guru's time here that he would recieve word of the birth of his son soon to be named Gobind Rai.

Ram Singh was not possesed of the forceful personality or military ability of his famed father. To keep him from involving his subjects in plots against him, during his absense in the Deccan, Aurangzeb had him posted at Jamrud to keep the frontier roads open and to subdue the Pashtun tribes and collect their payment of subsidies - badly needed to finance Aurangzeb's follies in the South.

Aurangzeb took away his only son Kanvar Kishan Singh to serve in the Deccan Wars, where the unfortunate prince met the fate of several Rajput chiefs who had been poisoned or killed in plots arranged by Aurangzeb. Then Aurangzeb demanded Ram Singh to send his grandson Bishan Singh to the Deccan. Ram Singh, remembering the fate of his son and other Hindu princes, refused to comply.

The angry Aurangzeb deprived him of his post in 1686, demoted him in rank, and sent him to Kohat where he died (April 1688) mourning for the fate of his dynasty at the hands of the bigoted Mughal emperor.

Amber state stayed loyal to the Mughals in an attempt to regain its influential position through military service. Aurangzeb once again levied the hated jizia (a tax on non Muslims) on Amber.

Raja Ram Singh was succeeded on the Amber throne by his grandson Bishan Singh.