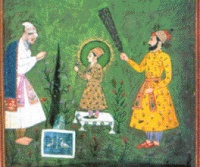 Mirza Raja Jai Singh (July 15, 1611 – August 28, 1667) , Kachhvaha Rajput prince and one of the senior generals under the Mughal emperors Shah Jahan (1628-58) and Aurangzeb (1658-1707), succeeded to the feudal chieftainship of Amber (Jaipur) in 1617 when he also got his first appointment in the Mughal army. "Since then", writes Sir Jadunath Sarkar in his, History of Aurangzeb, vol. IV, "he had fought under the imperial banner in every part of the empire from Baikh in Central Asia to Bijapur in the Deccan, from Qandahar in the west to Mungir in the east." When he was fighting for the throne in 1858, Aurangzib had solicited and secured Jai Singh's assistance as a reward for which he was made governor of Delhi city with the grant of Sambhar, a rich province flourishing on its salt trade.

Mirza Raja Jai Singh, although a Mughal vassal, was a staunch Hindu and an admirer of the Sikh Gurus. During his stay at Delhi, he was used by Aurangzeb as an intermediary to summon to the Court first Guru Har Rai in 1661 and later Guru Har Krishan in 1664. Guru Har Rai did not go to Delhi himself, and sent his son Ram Rai instead. Guru Har Krishan, who in compliance with the Emperor's wishes, visited Delhi in March 1664, put up in Raja Jai Singh's bungalow which is now the site of Gurdwara Bangla Sahib in New Delhi. The Guru passed away to his heavenly abode on 16 April 1664 at the residence of Raja Jai Singh.

Later in 1664, Mirza Raja Jai Singh at the head of 14,000 troops was assigned to the Deccan campaign against Shivaji. Jai Singh not only reconquered a number of forts, but also persuaded Shivaji in 1666 to attend the Emperor's court. He was kept in virtual confinement in the house of the Kachhvaha Raja under the care of Jai Singh's son, Kanvar Ram Singh. But Shivaji and his son, Sh'ambhuji, made good their escape, escaping in containers of sweets, on 19 August 1666. Aurangzeb's suspicion and ire fell upon Raja Ram Singh as well as upon Jai Singh. The latter was recalled to the court, but he died on the way at Burhanpur on 2 July 1667.