The Pipal tree, also Peepul, Bo, and Bohdi tree is a large deciduous tree with grey bark which is the color and texture of the Indian elephant. It has large 'heart' shaped leaves which many people around the world associate with the the 'red heart' which is used as a rebus or symbol for ish (romantic love). As in I heart NYC or I heart the Panjab. It is believed by Hindus to be the tree under which Lord Vishnu was born and to also be the tree under which his later Avatar Lord Krishna died.

A Hindu legend tells of a dedicated wife winning the return of her husband from the grip of Lord Yama himself. Hindu wives, yearly, in a tradition called Karwa Chauth undergo a sunrise to sunset fast consuming no water or food, for the Hindu wife this is a very serious fast which is done to secure a long and healthy life for her husband. Female friends, the wives of a village or of a family usually socialize and break their fasts with an offering of water to the moon[1]. Husbands usually return at this time bearing gifts for their wives and join in the festivities. Special sweet treats and foods are served. 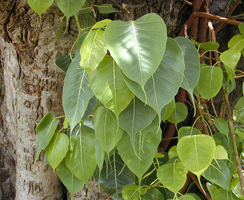 Guru Nanak's mother would have followed this fast as a Hindu widow's (especially a young, or son less widow's) lot was not something to look forward too. Guru Nanak (who as a child showed an indifference to Hindu rituals for ritual sake (see Guru Nanak and the Sacred Thread ) and all the Sikh Gurus worked for the rights of women. While a male child is so important their are still problems with female foeticide, not just in India, but in much of the world.

In India, the horrors of widowhood, sati (immolation), often forced, was only the worst 'punishment'. A , most often childless Hindu widow became a none person who could wear no color and show no happiness - a virtual slave of her inlaws, punished with the worst tasks. As seen in the Bollywood movie Sholay this mistreatment lasted into the 20th century. Not only limited to the Hindus of India, so called kitchen fires were in 2007 outlawed in Canada. The Canadian law is aimed at new Muslim immigrants, some of whom still practice so called 'honor' killings. The Gurus' rights for women have yet to reach much of the Muslim world.

Sidartha Gautama and the Buddha's Enlightenment

The Ficus Religiosa or Sacred tree. Once, an old Hindu Sadhu had decided to set in meditation until he attained 'Moksha'. Near death the skeletal Sadhu was awakened by a childless woman who had come offering the spirit of the tree food and a prayer for a son[2]. It is said that the woman thought the Sadhu was the spirit of the tree. The starving Sadhu ate the food and under what is now also known as the Bodhi or Bo tree Sidartha Gautama attained enlightenment and became the Buddha (enlightened). The original tree of the Buddha at Sarnath was said to have been destroyed by Asoka (tear or griefless) a famous Indian king who spread Buddhism to the Bamian valley and across Asia (The Taliban sought to destroy all traces of this). A portion of the original tree was transplanted to Sri Lanka and is the oldest living tree of this species. Images of its leaves adorn the Flag of Sri Lanka.

The tree is also the national tree of India where most villages have a large Pepul planted in the village chauk, the tree is lovingly tended by the Hindus of the village. The Pipul provides a large amount of oxygen to the air and removes a large amount of carbon monoxide. Its shade against the relentless Indian sun is greatly appreciated by all. Indian Hindus are said to be afflatus in their affections for this tree. Afflatus is a Latin word which means 'divine inspiration'. As when Jibr'l spoke Gods words to Mohamet and when Guru Nanak bypassing the angel spoke directly with God.

The tree finds its existence in Sub Himalayan tract and outer hills , ascending to greater heights from Chinab eastward to Marwara, Assam and lower Bengal. In the eastern parts of India, the tree is locally reffered to as Pipar or Paras. Pipal trees found in the Jaunasar 'catches a lower heights up to 4000 feet' as elsewhere in Garwal, Ajmer, Bihar, Central provinces, Nagpur, Western Peninsula in the Deccan and near the coastal areas along the southern tip of the Indian Ocean up to bay of Bengal. The trees grow throughtout all of Asia.

Pipal branches and leaves are the best fodder for elephants; its leaves are also used in Hindu religious rituals. Dried leaves are sold around the world admired for their intricate pattern.

In the west the tree is often confused with the Banyan or wish giving Tree under which the Banias or merchants hold their their markets in Indian villages. Hence the name. Ghandhi Ji was of the Bania/Vania caste. He spent his adult life astranged from his caste as he refused to do the necessary rituals to regain his loss of caste due to his traveling over salt water to England.

[1] This sighting of the moon is also critical in the Muslim ending of the fast of Ramazan.

[2] This custom has spread throughout Asia both east and west with notes written on paper tied to trees in Iran and notes on paper in little red boxes hung in trees in China. Pipal, Banyan and other trees are so festooned in this wish for a 'male child' who rescues his father from hell (a Hindu tradition by officiating at his cremation) and by doing the yearly ancestral worship.