From SikhiWiki
(Redirected from Nairobi)
Jump to navigationJump to search 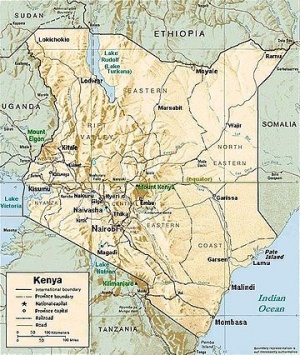 The Republic of Kenya is a country on the Eastern coast of Africa. Lying along the Indian Ocean, at the equator, Kenya is bordered by Ethiopia (north), Somalia (northeast), Tanzania (south), Uganda plus Lake Victoria (west), and Sudan (northwest). The capital city is Nairobi. The population has grown rapidly in recent decades to nearly 38 million. Kenya has numerous wildlife reserves, containing thousands of animal species.

The country is named after Mount Kenya, a significant landmark and the second among the highest mountain peaks of Africa. Both the area and the mountain were originally usually pronounced /ˈki˝njə/ in English, though the native pronunciation and the one intended by the original transcription Kenia was [ˈkɛnja].

During the presidency of Jomo Kenyatta in the 1960s, the current English pronunciation of /ˈkɛnjə/ became widespread because his name retained the native pronunciation. Before 1920, the area now known as Kenya was known as the British East Africa Protectorate and so there was no need to mention mount when referring to the mountain.

In 1888 the Imperial British East Africa Company began to colonize the area. The building of the Kenya–Uganda railway that passed through the country, was resisted by some of the native tribes. During the railway construction era, there was a significant inflow of Indian peoples who provided the bulk of the skilled manpower required for construction. It was during this time, while building the railroad through Tsavo, that a number of the Indian railway workers and local African labourers were attacked by two lions known as the Tsavo maneaters. The Indians and most of their descendants remained in Kenya and formed the core of several distinct Indian communities such as the Ismaili Muslim and Sikh communities.

Today there are many Sikh Temples situated in Kenya. View Gurdwaras in Africa