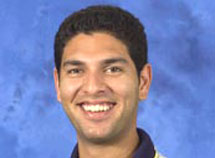 A young Sardar, trimmed hair, no Pagri and no beard

Mona Sardar or Mona Sikh is a term applied to a male of Sikh heritage who does not keep the basic kakkar of kesh or untrimmed hair. Mona means bald or clean shaven or trimmed hair. As well as being labelled with the term mona such men are also referred to as "rowday" (pronounced row-day plural or rowdah singular).

According to the Sikh Rehat Maryada, the cutting of hair is a bujjer kurahit (the deed of an apostate - i.e. someone who has turned away from Sikhi). Today lakhs (hundreds of thousands) of Sikhs are "inhead" ("inhead" is another pejorative term similar to Mona and Rowdah, used by Sikhs who are following the Rehat Maryada when refering to those who are not).

Shortly before his death Guru Gobind Singh transferred spiritual authority for the Sikhs to the eleventh Guru, Guru Granth Sahib at the same time turning over matters of earthly conduct over to the Sikhs themselves or Khalsa panth. The Sikh Rehat Maryada is the product of collective Panthic wisdom. Some of the greatest Sikh scholars have contributed to and deliberated over its contents. It is a code of conduct which the Sikhs' chosen authorities, themselves, have established. Actually the Rehat Maryada was proposed by the Shiromani Gurdwara Prabandhak Committee's Conduct and Conventions Sub-Committee in 1936. It was reviewed again in January of 1945 with recommendations for certain additions to and deletions from it being proposed and considered. The following gentlemen attended this meeting of the Advisory Committee: 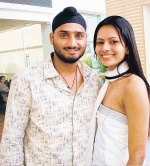 Sahajdhari Sardar with patka and trimmed beard posing with a lady.

Today the ideals of conduct decided by men in the first half of the last century are being questioned by the attitudes and actions of Sikhs in this modern and global age especially by the young.

Around the world, the turban or "pag" or "pagri" is a recognized and respected symbol of Sikhi, but to really see the 'culture of the Turban' one must go to the Punjab where it is still prevalent, however, even there, many male Sikhs, especially the young have taken to trimming their beards which is not acceptable to the Rehat Maryada as framed in 1945.