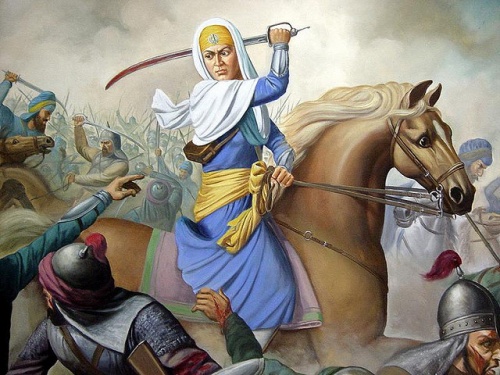 Mai Bhago also known as Mata Bhag Kaur was a Sikh woman who led 40 Sikh soldiers against the Mughals in 1705. She killed several enemy soldiers on the battlefield, and is considered to be a saint warrior by the Sikh Nation for over 300 years. She was the sole survivor of the battle of Khidrana, i.e. Battle of Muktsar (fought on 29 December 1705); She was a daughter of Bhai Mallo Shah. She was also the grand-daughter of Bhai Piro Shah, who was the younger brother of Bhai Langah, a Dhillon Jatt Chaudhary of 84 villages, who had become a Sikh during the time of Guru Arjan, the fifth Sikh Guru. She was the only sister of four brothers.

Born at her ancestral village of Jhabal Kalan in present day Amritsar district of the Punjab, in the Majha region, she was married to Nidhan Singh Warraich of Patti; She was a staunch Sikh by birth and upbringing. She was distressed to hear in 1705 that some of the Sikhs of her village neighborhood, who had gone to Anandpur Sahib to fight for Guru Gobind Singh Ji, had deserted him under adverse conditions.

Finding these 40 men (now called the "challi mukta") who had deserted the tenth Guru she persuaded them to find the Guru. She managed to convince them to apologize for leaving Anandpur sahib while it had been under attack; further she them to seek the Guru's permission to be reinstated as Sikhs.

She set off along with them and some other Sikhs to find the Guru, who had been pursued by Mughal forces since leaving Anandpur. They caught up with him in the area around Malva. Mat Bhago and the men she was leading stopped near the dhab (pool) of Khidrana just as an imperial army was about to attack the Guru.

The 40 sikhs who had asked the Guru for permission to leave Anandpur, had been allowed to leave, but the Guru had asked them first to leave the Khalsa and dis-avowing him as their Guru. Now fate gave them the chance to redeem themselves, never mind that even though they appeared as Sikhs, they were no longer Khalsa. ( But the Guru knew that they were not weak In Sikhi, they would come back, and Guru (Father), would bless them.

Fight to the death

So despite the fact that they surely faced certain death, the forty (chali) men along with Mai Bhago, waded headlong into the Muslim forces (around 10,000 soldiers) and inflicted so much damage that the Muslims were finally forced to give up their attack and retreat as darkness fell to lick their wounds in the nearby woods.

Mai Bhag kaur, was a great Sikh women, with a Keski tied around her head, with the Khalsa Uniform, with her Kirpan fighting, she was the first women In the history of Punjab, to fight On a battlefield.

The Guru had watched the battle from a nearby hill and with deadly accuracy had rained down a flurry of arrows on the Mughal fighters during the attack. Seeing little activity among the party that had come to his aid he rode to the battlefield.

He found that group was composed of the forty men who he had asked to sign a paper dis-avowing him as their Guru, all of them had died of their wounds except one, Mahan Singh Brar, who was mortally wounded, had only the time to look up at Guru Gobind Singh as he pulled him upright with his arms pulling him into his lap. It is said that the note the men had signed slipped out of the dying Sikh's clothing and was picked up by the Guru who told Mahan Singh that all was forgiven and that all had died as martyrs as the Guru tore-up their letter of resignation.

When someone dies fighting for their faith or religion, the person is called a Shaheed. The Chali Muktis were also Shaheeds.

The Forty Liberated Ones

Sri Guru Gobind Singh blessed the forty men as the forty (chali) liberated ones (mukte) and that is still how the men are known today; the "Forty Liberated Ones", the Chali Mukte. He took into his care Mata Bhago who had also suffered injury in the battle.

After recovering she thereafter stayed on with Guru Gobind Singh Ji serving as one of his bodyguards, in warrior attire. She was one of many Sikhs who accompanied the Guru on his journey to Nanded. After the passing of Guru Gobind Singh at Nanded in 1708, she retired down at Jinvara, 11 km from Bidar in Karnataka where, immersed in meditation, she lived to attain a ripe old age.

Her hut in Jinvara has now been converted into Gurudwara Tap Asthan Mai Bhago. At Nanded, too, a hall within the compound of Takht Sachkhand Sri Hazur Sahib marking the site of her residence is known as Bunga Mai Bhago.