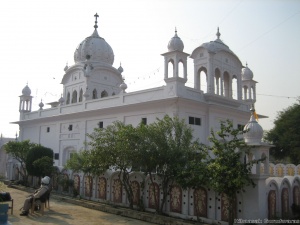 Gurdwara Janam Asthan Mai Bhago, Jhabal Kalan, is located in the interior of Jhabal Kalan village, in Amritsar District of Punjab. It is the birth place of the famous Sikh Warrior Mai Bhago alias Mata Bhag Kaur, who was born in the house of Bhai Mallo Shah ji, a devout Sikh a, Dhillon Jatt, Chaudhary (chieftain), of 84 villages and Jhabal kalan, the granddaughter of Bhai Pero Shah, the first in line to convert to Sikhism, along with his elder brother Chaudhary Bhai Langah, during the time of Guru Arjan Dev Ji.

The House of Mai Bhago, has fell into ruins, and is kept as a heritage for the younger generation, to see this old Sikh heritage. The Janam Asthan is built next to the old house of the Jhabalia Chieftains. Mai Bhago was married to Nidhan Singh Waraich (d. 1705), of a village near Patti, in Amritsar District of Punjab. Nidhan Singh Waraich, had become a Shaheed, in the battle of Khidren di Dhab, he was one of the Chale Mukte, She was the sister of four brothers, who also became Shaheed in that battle.