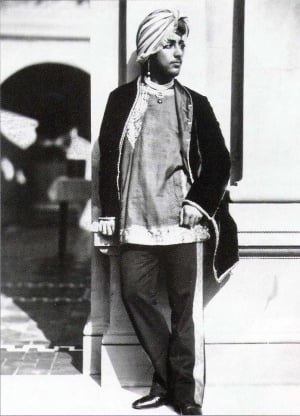 The Maharaja at Osborne House, photographed by his German teacher Dr.Ernest Becker

Maharajah Duleep Singh Sir Duleep Singh, GCSI (Lahore, 6 September 1838 - Paris, 22 October 1893) was the last Sikh ruler of the Sikh Raj, which had at its height included Panjab, the Northwest Frontier Provinces, Kashmir, Jammu and Ladak. He was the youngest son of the legendary Shere-e-Punjab (Lion of the Punjab) (Maharaja Ranjit Singh) and (Maharani Jind Kaur). In his later years Duleep Singh purchased a 17,000 acre (69 km²) country estate at Elveden. He fell in love with Elveden and the surrounding area and restored the church, cottages, and school. He transformed the run-down estate into an efficient game preserve and the house into a quasi-oriental palace where he lived the life of a British aristocrat, hunting with the High Society and Royals of Britain, even the Prince of Wales enjoyed hunting at his Estate.

After the Deaths of his brothers and nephew all of whom were Maharaja Ranjit Singh's brief sucessors to the Khalsa Kingdom's throne. The early years of the life of Duleep Singh, the new and last Maharaja of the Punjab, were played out against the rich background of his grandfather's court and the lavish palaces and gardens of Lahore.

As a child he enjoyed falconry and had the best horses and elephants to ride. He received a royal education with two tutors, one for Persian and one for Gurmukhi. He was taught to shoot guns and bows and trained to command. The love of his mother surrounded him. It must have seemed a kind of heaven, a place full of magical enchantment for the boy, but the brutalities of politics soon invaded.

A Kingdom and its Ruler Stolen

Following the defeat of the Khalsa Army in 1846, Duleep Singh's kingdom was reduced to half its size and a British resident was installed in Lahore. Despite the apparent generosity of the peace treaty, in reality the British began to dismantle the Sikh State.

As the second Anglo-Sikh war concluded, the British entered Lahore and removed Duleep Singh into exile to a town called Fatehghar. He left behind his throne, his palaces, much of his personal fortune and his country, never to return. Fatehghar, an admired centre of Christian missionary activity in Northern India, was where Duleep Singh, isolated from the influence of other Sikhs, became a Christian. He was even separated from his mother who was also moved far away from the Panjab to prevent her becoming a rally point for further troubles from the Sikhs of the Punjab. 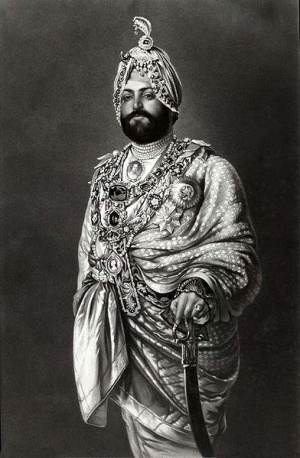 A portrait of the Maharaja, dressed in his Royal Regalia

A year later Duleep Singh was spirited away to England, he quickly gained a royal audience and was an immediate success with Queen Victoria. She commissioned the best portrait painter of the day, Franz Xavier Winterhalter, to paint Duleep Singh during one of his numerous stays at Buckingham Palace. It was during one of those sessions posing for the portrait that the young Maharaja got a chance to hold his once most precious possesion the fabled Koh-i-nur diamond which had been re cut to almost half its former size by Prince Albert in and attempt to improve its brilliancy.

After looking at the diamond for a few seconds Duleep Singh handed the ring back to the Queen. The story of this, his handing the diamond over to the Queen, made headlines all over the world. When Lord Dalhoosie heard of the matter, it was reported that he flew into a rage. Eventualy Dalhoosie's decendant sued for the diamond along with each of the governments of the countries the diamond had once rested in.

Superstition holds, even today, that the diamond brings misfortune to any male who wears it. When one looks at the events that befell the male Rulers who wore the diamond one can see why the English who even clip the wings of the crows at the Tower of London and replenish the monkeys of Gibrator because of superstitions, have been careful to make sure that no male heir to the English throne ever wears it. To ensure that, it has been mounted into the Queen Mother's Crown. When the Crown was placed on the gun carriage carrying Queen Elizabeth's mother to her funeral, the same one that had been used her husband George VI's funeral, 50 years earlier, the crown fell to the ground and rumors of catastropies to come were soon afoot.

The Maharajah lived in Scotland, in the area of Perthshire, throughout his teens and into his twenties. Naturally, the young man quickly became the centre of attention there, the locals referring to him as "The Black Prince of Perthshire". His reputation grew with the lavishness of the receptions, shoots and entertainment's he held which became ever more popular as the years passed.

In 1860, the Maharajah returned to India to rescue his ailing mother from political exile in Nepal. This visit was particularly unsettling for the young man who had not expected the enthusiastic welcome from ex-courtiers and Sikh soldiers whilst enduring the curtailment of the British Government. Soon both mother and son were returned to London. For the next four years they were a regular sight in the society scene, then in 1863 she suddenly died. She had, however, made him remember the past.

Once again, the Maharajah returned to India, this time to cremate his mother. He did not return home alone, he chose as his wife a part Ethiopian, part German, Arabic speaking girl from a Cairo mission school; Bamba Muller.

The Years at Elveden 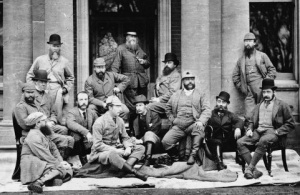 He took her home to his newly acquired home at Elveden, selected and purchased for him by the India Office, and transformed the run-down estate into an efficient, modern, game preserve and the house into a semi-oriental palace. With halls decorated in the fashion of a shish mahal and dominated by the huge oil paintings of Ranjit Singh in durbar or at the Golden Temple, of his brother Sher Singh in regal splendour and with sculptures of past glories and cases of jewels, the whole place was a powerful reminder of his former status.

Duleep Singh loved Elveden and rebuilt the church, cottages and the school. His fame as a game shooter that he gained during his days in Scotland was to be relived in the grounds of the great Elveden Estate. He invited the Prince of Wales to his highly successful shoots.

Despite his English education and royal life style amid European glamour, the rebellious Sikh spirit that had tasted sovereignty was hibernating in some remote recess of the sub-conscious mind of Maharajah Duleep Singh who on gaining self-awareness underwent a metamorphosis that turned him into a rebel. In 1886 he made up his mind to return to India and place himself as the prophesised moral head of the Sikh people. He got as far as Aden where he was arrested and returned to Europe.

With his innate political acumen, he glanced over the international horizon, established secret contacts with the Punjab, Irish revolutionaries, and the Russian government. Before his intended march from Russia to India, Duleep Singh had been re-initiated as a Sikh by taking amrit pahul.

In the proclamations issued by him, he asserted himself to be "the lawful sovereign of the Sikh nation". But the destiny willed it otherwise. His health broke down and he suffered an epileptic fit in a lonely room of the Hotel de la Tremouille in Paris.

It seems that his belated realisation that his second wife Ada was, perhaps, a planted spy whose duties where to monitor his intentions and activities caused him a mental shock that hastened his "dark and mournful end" on October 22, 1893.

Though he had requested to be returned to India to be cremated as a Sikh, fears of troubles his return might cause led the authorities to bury him on his estate at Elvenden.

The following quote is from the website of the Maharaja's former Home at Elveden.

The Estate was designed as the spectacular backdrop for entertaining Kings, Princes and many illustrious personages over the past 150 years. Before 1896 part of it was the house of Queen Victoria’s favourite HH The Maharajah Duleep Singh.

The website for Elvenden where tours can be booked with photos depicting the Estate's history [1] . Last year the Estate's web site included a history section, a check today Sept. 1, 2009 I found that the site - http://www.elveden.com/Estate-History.php- has been discontinued. Currently the Site no longer has any mention of history or the Maharaja's having ever been there. Although Four events with tickets are scheduled, no event honoring its ownership by the Maharaja is included. Perhaps with hunts no longer politically correct, its long history of hunts is an embarrament. But one would think that Sikhs and others could easily sell out a Punjabi style Mela in honor of the last Maharaja to sit on the Khalsa Raj Throne.

The First Earl of Iveagh, Edward Cecil Guinness, purchased the Elveden Estate from the Executors of Maharajah Duleep Singh in 1894. Lord Iveagh's main interest was in the Shooting and Elveden was reputed to be one of the best Sporting Estates in the country. Throughout the Edwardian period the fame of the Elveden Shoot became widespread. Several English Kings and Princes are amoung those who have enjoyed the hunting at the Maharajas former Estate. Details concerning the estate can be read at [2]