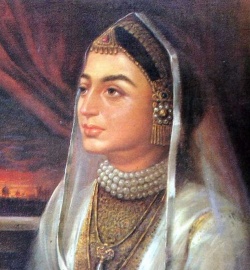 Maharani Jind Kaur (1817-1863), who was popularly known as Jindan, was one of the wives of Maharaja Ranjit Singh and mother of Maharaja Duleep Singh, the last Sikh sovereign of the Punjab from 1844-1849. And also known as the Messalina of Punjab. She was ravishingly beautiful and soon caught the attention of the great Maharaja Ranjit Singh,who also replied she would be his last wife. She was the youngest of the three daughters of Sardar Manna Singh, an Aulakh Jatt of a small village of Chicharwali, in Sialkot district, of Punjab.

Sardar Manna Singh, who held a humble position at the Lahore court as an overseer of the royal kennels, asked Sher-e-Panjab, to marry his young daughter. She was married by the ceremony of Karewa (Old Punjab Tradition), to Ranjit Singh the Emperor of the Punjab, at the young tender age of 18, in 1835. Scant notice of Maharani Jind Kaur was taken either by the official Lahore diarist, Sohan Lal Suri, or by any of the British records until 1838, when according to the former, a munshi brought the blessed tidings of the birth of a son to her. It appears that she and her son lived a life of obscurity under the care of Raja Dhian Singh at Jammu. In August of 1843, the young prince and her mother were brought to Lahore. In September 1843, both Maharaja Sher Singh and Dhian Singh were assassinated. Raja Hira Singh, Dhian Singh's son, with the support of the army and chiefs, wiped out the Sandhawalia faction. Shortly after, Hira Singh captured the Fort of Lahore and on 16 September 1845, the army proclaimed the minor Duleep singh the sovereign of the State. Hira Singh was appointed the wazir.

Who is the real sovereign

The political history of Jind Kaur begins from that date. Gradually, she assummed the role of a dejure regent to the minor Maharaja. Both Hira Singh and his adviser, Pandit Jalla, did not allow her the courtesy and consideration she was entitled to. Her establishtnent was put under the control of Misr Lal Singh. Jind Kaur mobilized opinion at the Darbar against the dominance of the Dogras. She and her brother,Jawahar Singh, pleaded with the army panchayats (regimental committees) to banish Pandit Jalla and protect the rights of her son Duleep Singh. "Who is the real sovereign," she angrily asked the regimental committees assembled in council "Duleep Singh or Hira Singh?” If the former, then the Khalsa should ensure that he was not a ruler with an empty title. The council assured the Rani that Duleep Singh was indeed the Maharaja of the Punjab. The army generals treated Jind Kaur with deference and addressed her as Mai Sahib or mother of the entire Khalsa Commonwealth.

The Maharani cast off her veil

The eclipse of the Jalla regime was a political victory for Maharani Jind Kaur, who had goaded the army to overthrow Hira Singh and install her brother Jawahar Singh as the Wazir. Raja Hira Singh and his deputy Pandit Jalla were killed by the Khalsa Army on 21 December 1844. Maharani Jind Kaur, who had an active hand in overthrowing Hira Singh, now cast off her veil and assumed full powers as regent in the name of her minor son, Duleep Singh. To run the administration, she constituted a Council of Regency on 22 December 1844. She now assumed control of the government with the approval of the army generals who declared that they would place her on the throne of Delhi.

She became the symbol of the sovereignty of the Khalsa ruling the Punjab in the name of her son. She reviewed the troops and addressed them, held court and transacted state business in public. She reconstituted the supreme Khalsa Council by giving representation to the principal sardars and restored a working balance between the army panchayats and the civil administration.

Numerous vexations soon confronted the Maharani. First, an alarm was created that an English force was accompanying Peshaura Singh to Lahore, and that he was being helped secretly by Gulab Singh. Secondly the troops clamoured for a raise in their pay and the feudatory chiefs demanded the restoration of their jagirs, remission of fines and reduction of enhanced taxes and burdens imposed upon them by Hira Singh. Finally, it appeared that the diminishing revenues of the State could not balance the increasing cost of the civil and military administration.

Jind Kaur applied herself to the solution of these problems and secured to this end the assistance of a newly appointed council of elder statesmen and military generals. Kanvar Pashaura Singh was summoned to Lahore and persuaded to return to his Jagir Early in 1845, a force 35,000 strong marched to Jammu for the chastisement of Gulab Singh. The council had accused him of being a traitor to the Panth and charged him with treachery and intrigue against his sovereign. In April 1845, the army returned to Lahore with the Dogra chief as a hostage. The pay of the soldiery was enhanced and Jawahar Singh was formally installed as Wazir. Maharani Jind Kaur's choice of Jawahar Singh as Wazir became the subject of criticism. To counteract the rising disaffection, Jind Kaur hastily betrothed Duleep Singh, to Tej Kaur the daughter of Sardar Chatar Singh Atarivala (d. 1755), opened top negotiations with Gulab Singh and promised higher pay to the soldiery. When Jawahar Singh was assassinated by the army Panchayats suspecting his hand in the murder of Kanvar Peshaura Singh, Jind Kaur gave vent to her anguish with loud lamentation. Early in November 1845, she, with the approval of the Khalsa Council, nominated Misr Lal Singh to the office of wazir.

British on the Sikh frontier 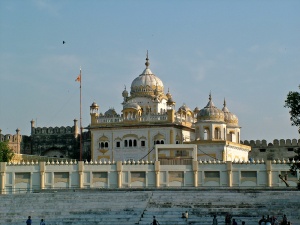 Maharani Jind Kaur has been accused by some historians of wishing the Khalsa army to destroy itself in a war with the English. A more balanced and realistic view will be obtained by a closer examination of the policies of Ellenborough and Hardinge and of other incidental political factors which led to a clash of arms between the Sikhs and the English in December 1845, The Ellenborough papers in the Public Records Office, London, especially Ellenborough's and Hardinge's private correspondence with the Duke of Wellington, disclose the extent of British military preparations on the Sikh frontier.

Their correspondence reveals the inside story of the main causes of the first Anglo-Sikh war. The republican upsurge of the Khalsa soldiery to save Ranjit Singh's kingdom from foreign aggression, the concentration of large British forces on the Sutlej, the British seizure of Suchet Singh's treasure, the intrigues of British political officers to break the loyalty of the Sikh governors of Kashmir and Multan, the rejection of Lahore's claim to the village of Moran, and the extraordinarily hostile conduct of Major George Broadfoot, the British Political Agent at the North-West Frontier Agency, towards the Sikhs, particularly the virtual seizure by hint of the cis-Sutlej possessions of the Lahore Goverment in view of these factors, the theory that the Sikh army had become perilous to the regency and that the courtiers plotted to engage the army against the British becomes untenable on the contrary, the regent was the only person who exhibited determination and courage during the critical period of the war with the British.

In December 1846, Maharani Jind Kaur surrendered political power to the council of ministers appointed by the British Resident after the treaty of Bharoval. The Sikh Darbar ceased to exist as a sovereign political body. The regent was dismissed with an annuity of Rs 1,50,00O and "an officer of Company's artillery became, in effect, the successor to Ranjit Singh"

Maharani Jind Kaur was treated with unnecessary acrimony and suspicion. She had retired gracefully to a life of religious devotion in the palace, yet mindful of the rights of her minor son as the sovereign of the Punjab. Henry Lawrence, the British Resident at Lahore, and Viscount Hardinge both accused her of fomenting intrigue and influencing the Darbar politics. After Bharoval, Hardinge had issued instructions that she must be deprived of all political power in March 1847, he expressed the view that she must be sent away from Lahore.

At the time of Tej Singh's investiture as Raja of Sialkot in August 1847, it was suspected that the young Maharaja had refused to confer the title on him at the instigation of his mother. She was also suspected of having a hand in what is known as the Premilla Plot a conspiracy designed to murder the British Resident and Tej Singh at a fete at the Shalamar Gardens. Although neither of the charges against Jind Kaur could be substantiated on enquiry, she was removed to Sheikhupura in September 1847, and her allowance was reduced to Rs 48,000. Lord Dalhousie, instructed Sir Frederick Currie, the British Resident at Lahore, to expel her from the Punjab. Currie acted promptly. He implicated Jind Kaur in a fictitious plot and sent her away from Sheikhupura to Banaras. She remained interned at Banaras under strict surveillance in 1848, allegations were made by Major MacGregor, in attendance on her, that she was in correspondence with Mulraj and Sher Singh at Multan. A few of her letters were intercepted and an alarm was created when one of her servant girls escaped from Benaras (Kashi). She was removed to the Fort of Chunar from where she escaped to Nepal disguised as a maid-servant. 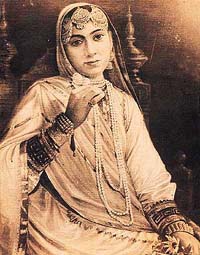 Maharani Jind Kaur arrived at Kathmandu on 29 April 1849. The British Government promptly confiscated her jewellery worth Rs 9,00,000 and stopped her pension At Kathmandu, the sudden appearance of the widow of Ranjit Singh was both unexpected and unwelcome, Yet Jung Bahadur, the prime minister, granted her asylum, mainly as a mark of respect to the memory of the late Maharaja Ranjit Singh. A residence was assigned to her at Thapathall, on the banks of the Vagmati river, and the Nepalese government settled upon her an allowance for her maintenance. The Nepal Residency papers relate the details of Jind Kaur's unhappy sojourn in Nepal till 1860. The British Residency in Kathmandu kept a vigilant eye on her throughout, believing that she was engaged in political intrigue to secure the revival of the Sikh dynasty in the Punjab.

Under constant pressure firm the British, the Nepal Darbar turned hostile lowards the Maharani and levied the most humiliating restrictions on her. But the forlorn widow of Ranjit Singh remained undaunted. She quietly protested against the indignities and restrictions imposed upon her by Jung Bahadur. Jung Bahadur expelled from the valley one of her attendants, and the Maharani dismissed the entire staff foisted upon her by the Nepalese Government. She was then ordered to appear in person in the Darbar to acknowledge Nepalese hospitality, which she refused to do. The breach between her and Jung Bahadur widened. The Nepal Residency Records tell us that an open rift took place, and "several scenes occurred in which each seemed to have given way to temper, to have addressed the other ill very insulting language."

Towards the end of 1860, it was signified to Jind Kaur that her son, Duleep Singh, was about to return to India and that she could visit him in Calcutta. She Welcomed the suggestion and travelled Calcutta to meet her son, Who took her with him to England, where the Government thought that she was not longer a threat to them. She had lost her eye sight, and lost her her beauty, Jind Kaur died at Kensington interior of London City, England, on 1 August 1863. Duleep Singh, wished to take her body to the Punjab, where he would cremate her. The British Government did not allow this to happen, So the stolen ruler, departed for Bombay, where he cremated his mothers body, their he built a small memorial (Samadh). Later the ashes in the year 1924, were dug out of the Samadh, and taken to the Punjab, where in Lahore, they were reburied in the Samadh of Maharaja Ranjit Singh Sher-e-Panjab. Today they are considered the first Sikh settlers of England.