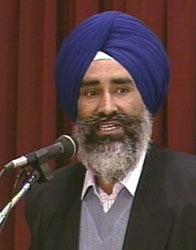 Shaheed Jaswant Singh Khalra (1952-1995) was a human rights defender who was born in Khalra village of Amritsar district. He was a bank employee in Amritsar during the 1980's. After Operation Blue Star, the assassination of Indira Gandhi, and the 1984 Anti-Sikh Riots in which thousands of innocent Sikhs died at the hands of crazed (some apparently organized) Hindu mobs, after the Prime Minister was assasinated by her trusted Sikh bodyguards. In the Punjab police were empowered to detain Sikhs for any reason, ostensibly as suspected terrorists. Seeing that many of his friends and colleagues had gone missing, he researched information which eventually led him to find files from the municipal corporation of Amritsar which had information containing the names, age and addresses of thousands of Sikhs who had been killed and illegally cremated by the Punjab Police.

In 1995, Jaswant Singh was last seen washing his car in front of his house, when he disappeared. Witnesses gave statements implicating the police and implicated, 'the butcher of Punjab' - KPS Gill, but the Punjab Police denied that they arrested him, and claimed they knew nothing about his whereabouts. In 1996, the Central Bureau of Investigation found evidence that he was held at a police station in Tarn Taran and recommended the prosecuting of nine Punjab police officials for his murder and kidnapping.[1]The case concerning the "disappearance" of humLater several police officials were charged and eventually given life sentences. Apparently one of those involved in his death committed suicide before his accomplices were brought to justice. On November 18, 2005, six Punjab police officials were convicted and sentenced to seven years imprisonment for Khalra’s abduction and murder. [2] On October 16, 2007 a division bench of the Punjab and Haryana High Court, chaired by Justices Mehtab Singh Gill and A N Jindal, extended the sentence to Life imprisonment for four accused Satnam Singh, Surinder Pal Singh, Jasbir Singh (all former Sub Inspectors) and Prithipal Singh (former Head Constable) [3]

He is now referred to as Shaheed Jaswant Singh Khalra having become a Martyr for the Sikh religion. His widow Bibi Paramjit Kaur Khalra is currently carrying on her husband's fighting for justice and now her name has been added to the thousands of Sikhs who do not have any word of what happened to their loved ones.

Jaswant Singh Khalra's contribution to the Humanity and Human Rights is evident from his work. He collected the Data and information on thousands of Sikhs who disappeared and, according to the records brought to light by Jaswant Singh, were later eliminated by the State's Armed Forces and cremated as unidentified persons secretly by the Punjab Police.

This list contains the information of Sikhs cremated in just two tehsils (An Administrative Division) of Punjab. The Supreme Court of India and the National Human Rights Commission of India has certified the validity of this Data.

Jaswant Singh Khalra's assertion was that there would be more than 25000 Sikhs killed by the State and cremated by showing them as unidentified and unclaimed, while there are still many Sikh families waiting to hear news of what happened to their missing loved ones, many wondering if they might still be alive.

The following are excerpts from the English version of the last international speech given by Jaswant Singh Khalra:

I have come to Canada to talk about a report. That report describes the story of oppression of the past ten years. When we started that report, we had before us hundreds of reports, but there was one question to which none of those reports provided the answer. That question was: Thousands of mothers await their sons even though some may know that the oppressor has not spared their son’s lives on this earth. But a mother’s heart is such that even if she sees her son’s dead body, she does not accept that her son has left her. And those mothers who have not even seen their children’s dead bodies, they were asking us: at least find out, is my son alive or not?

But when we started talking about this issue, then countless mothers, countless sisters weren’t ready to say that their loved one has disappeared. They said, "Son, if you take this issue further and our son is still alive, they will kill him – don’t talk about this, we are not going to tell even you."

When the issue progressed, then the person in-charge of the oppression, KPS Gill said in a press conference in Amritsar, "These Human Rights Wing folks are not doing anything on human rights. They have one motive, to prop up their agenda, so that there is no peace in Punjab . They are ISI [Pakistan ’s Inter-Service Intelligence] agents and are hatching a conspiracy to discourage the police machinery to re-incite militancy." KPS Gill went onto the extent of saying, "I’ll tell you where those kids are." He said, "These kids are in Europe, in Canada , and in America , where they are earning their daily wages. And these human rights organizations are telling us that thousands of kids have disappeared." This was a challenge to us. This was a challenge to that truth which we sought to bring forward. Then, brothers, in order to bring this truth to the public, accompanied by evidence, we put ourselves on an arduous task where we had to confront various dangers. But we went there where our brothers had gone. We went to the cremation grounds. We went and asked the employees there just tell us this much that during this time, how many dead bodies did the police give you? Some said we burned 8-10 every day. Some said there was no way to keep an account; sometimes a truck full of bodies came, and sometimes 2-4 dead bodies. When we said we need an account, they told us we could get the account from one place: "The police gave us the dead bodies, and the municipal committee gave us the firewood."

So brothers! when we received this truth, we went to that country’s High Court. We knocked on the doors of Punjab and Haryana High Court, and asked, Oh Oppressors!, at least give us the detail that which dead body belongs to whom so that we can tell each mother, sister, so we can tell each father. So they can say their prayers to Almighty which they have been keeping in their heart, "Almighty, please let my son rest at your feet"... But that country, that calls itself the largest democracy and lover of justice, its High Court told us,"This is not public interest litigation. This creates a huge issue. Instead, do this - Send to us each of that family to whom the dead bodies belong and we will give them the information." A mockery has been made of the law. A mockery has been made of the Sikh nation. And a mockery has been made of those people, who are not asking for anything other than a death certificate.

But the biggest court of all is the people’s court and we want to go to the people’s court on a worldwide level and say to the world, "You have called us terrorist. You have called us communalists. But those whom you have called the prophets of democracy, recognize their reality and then tell us who is ultimately the terrorist and who is righteous?" We can say often that we have suffered much oppression. But we have not had the practice or training of keeping a complete record of that oppression. About 50,000, about 1 million – we say all of that. The educated people of the world do not trust that, they need exact figures. And for that, I also say, that you all should unite on this issue. This issue is not just the issue for those families. This is the [Sikh] nation’s issue, humanity’s issue. You all should present this issue, in whatever way you can. Condemn that government, that machinery, that justice system, and tell the truth to people. Please Brothers help us in this work.

So my brothers, pray to the Guru that we maintain our self-respect. We must safeguard the work for which we were created and earn the pleasure of the Guru. We ask the Guru for everything, but we're afraid to ask the Guru for that one gift. The Guru has many gifts, but what is the greatest gift the Guru has? The greatest gift is not milk, is not a son. And now the Guru does not even pass on the guruship to anyone. The Guru cannot make any saint a guru now. When the Guru gave the guruship to the Sri Guru Granth Sahib, the Guru kept one special gift, which any Sikh could invite. And after the time of the (Ten) Gurus, Sikhs paid so much respect to that special gift.

And that special gift, which the Guru possesses, is the gift of martyrdom. Those who receive this gift - they don't get to be Guru but after the Guru, they are the most respected people of our (Sikh) nation.