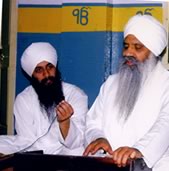 International society for Gurbani Consciousness is a society formed by a group of some highly educated Sikhs and others to promote and spread the true meaning of Gurbani under the guidance of Baba Jaspal Singh Ji. Gurbani means the voice of Gurus. The whole Sikhism is the follower of Sahib Shri Guru Granth Sahib ji Maharaj is our Guru and its contents are known as Gurbani.

ISGC also aims to develop the WORLD GURBANI for Gurbani Understanding at Indore (Madhya Pardesh) India, It will include an auditorium, library, a music Gurbani Learners hall with all facilites of music instruments. The teacher's will be appointed to assist the learners too. ISGC appeals to all Gurbani lovers spreaded in the world to donate and help this society to attain this noble cause of developing World Gurbani Centre

Baba Sant Baba Jaspal Singh ji hails from Los Angeles United States of America. He is an experienced master of the art of exposition and has given discourses on Gurbani during the last 35 years. Baba Jaspal Singh ji was born into a devout Gursikh family in the Punjab on 20th December, 1952. His father's name is Giani Gursharan Singh Ji and mother's name is Jasbir Kaur.

Babaji's father, Giani Gursharn Singh Ji, noticed his interest and inborn talent in music in his early age of five. Babaji was also very fond of Saints from his childhood, which meant that the seed for spirituality was finding it's way to grow, which led him to the feet of Sant Maharaj Isher Singh Ji. At the age of six Babaji began music training at home.

At the age of nine Babaji ji's father took him to Bhai Sahib Deedar Singh in Nangal, Punjab where there was a traditional school for Kirtan training. At the age of ten, Babaji started formal training from his first sangeet teacher, Pundit Sharan Das Ji in his home town Adampur. After that Babaji became a disciple of Bhagat Singh Sangla, Music Director at Jalandhar. All India Radio station, who was the disciple of Bade Gulam Ali Khan Sahib.

At a young age of twelve, he was keenly interested in music especially classical music. He started his training under well known Master in this field and specialized in vocal as well as instrumental classical music. During this formative period of his life, Babaji was deeply attracted those who expounded Gurbani and revealed its hidden meaning.

At the age of sixteen, Babaji became Bhai Sahib Bhai Avtar Singh Ji's disciple. He then went on to become a disciple of Hazoori Ragi Sees Ganj Sahib, New Delhi, who is the highest authority in traditional classical kirtan. Bhai Avtar Singh's gharana goes back 14 generations of Kirtan. The style of Dhrupad and Dhumar was learnt from Bhai Avtar Singh Ji. During this time Baba ji kept practicing on the detailed knowledge and expertise in Kirtan and the in-depth study of Gurbani.

In 1969, Babaji and his family migrated to England and during the next 14 years he continued to recite kirtan in England and other countries of Europe. In 1975 a momentous event took place as he met Sant Maharaj Baba Isher Singh Ji Rara Sahib in London which changed his life. He was enraptured with the personality, knowledge and grace of the Master and became his disciple. His devotion was rewarded when he was bestowed Naam Daan and the gift of Kirtan by Sant Maharaj Ji. With Sant Maharaj Ji 's grace he started the practice of Simran and the study of the Guru Granth Sahib Ji. In 1985 Babaji migrated to the USA and since then he devoted his life in the loving memory of his Master. His rigorous training in classical music coupled with a melodious voice enables him to be leading exponent of Gurbani and Kirtan in the classical ragas.

Babaji became disciple of the most shining person in the world of music, Ustad Mehndi Hassan of Pakistan, who taught him advanced techniques of alap and refineness of the "Sur" which added an entirely different flavor in Babaji's singing. In 1990, Babaji ji became a disciple of Srimati Lakshmi Devi, wife of Uday Shankarji who was the elder brother of Pandit Ravi Shankar Ji. She provided more advanced in improvization of Ragas. All these various Gurus of the Music School of thought contributed to the style of different Gharanas. Babaji's advanced practice of music used to be 10-12 hours a day. Babaji had the instinct love for Indian Classical Music.

Babaji must be given credit for reviving a tradition lost in the Gurudwaras which is a unique feature of his Kirtan, the way he involves the sangat to participate by singing Shabad. In his discourse, he explores the deeper meaning of the Shabad. If one were to look for the source of his life's unique exposition of Gurbani, one must look at this connection. Under the guidance of his Master Sant Maharaj Baba Isher Singh Ji, he lives in accordance to the highest principles of Gurmat. And teaches to others as one cannot teach what one does not practise. He inspires his listeners to do the same - to explore their inner worlds by connecting with their true self and explains these steps with compelling quotations and explanations, purely from Gurbani.