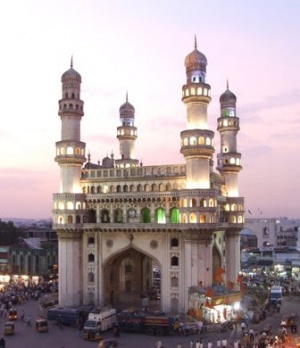 Hyderabad is the capital city of the Indian state of Andhra Pradesh. It is in the Telangana region of Andhra Pradesh. With approximately 8.1 million people (81 lakh), it is India's 6th largest metropolis and the 41st largest metropolitan area in the world. Hyderabad is known for its rich history, culture and architecture representing its unique characteristic of a meeting point for North and South India, and its multi-lingual culture, both geographically and culturally. Hence, Hyderabad is considered to be the gateway of southern India. Hyderabad has always been a place where Hindus and Muslims have co-existed peacefully for centuries.

Stop off for Sikh Pilgrims Headed for Takhat Hazur Sahib

Sikh pilgrims often use the city as a stop over to reach the important Sikh shrine of Takaht Sri Hazoor Sahib, which is located at Nanded in the adjoining state of Maharastra about 230 Km from Hyderabad. Also Bidar is about 130 Kms from Hyderabad. Bidar can be reached by by car in about 3 hours as the highway is of a good standard.

Hyderabad and the surrounding areas of Telangana have a distinct dialect. Here the spoken Telugu has assimilated many Urdu words, and in turn, the spoken Urdu is also unique, with some Marathi words and a unique Hyderabad accent, giving rise to a dialect sometimes called 'Hyderabadi Hindi'.

Aside from the city's famed Sagar Hussein ringed by statues of men of several faiths the city's most famed landmark is the Charminar.