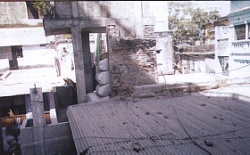 A collapsed section of the Gurdwara that urgently needs repairs.

Gurdwara Sangat Tola was visitd by Guru Tegh Bahadur. On his way to Assam his local followers had received him with great affection building the two storey Gurdwara for his stay. The Guru and some of his devotees accompanied a force of Mughal Soldiers dispatched to Assam. Guruji's assistance averted hostilities between Assam and Mughal Hindustan resulting in a peace treaty. He returned to stay for two years (1666-68) on his return from Assam. Sikh devotees visited him in hundreds every day listening to the Kirtan and holy discourses.

Guru Tegh Bahadur came to Dhaka from Assam and stayed here for two years (1666-68). It was here that Guru Sahib received the news of the birth of his son, Gobind Rai (later Guru Gobind Singh).

The Gurdwara Sangat Tola building is 300 years old and needed a great deal of restoration work. Baba Sukha Singh visited Bangladesh in March 2006 and met senior officials there concerning the works that were to be carried out. Granthi Singhs and Ragi Singhs were sent soon after to observe the Maryada in the Gurdwara. Baba Sukha Singh ji now regularly makes a trip here to oversee renovation and construction works.

On the retirement of Granthi Bhai Ram Singh, who had served the shrine from 1895 to the January 29, 1939, his son Bhai Kirpal Singh was appointed Granthi. While he left in the wake of Partition in 1947, his mother Kanchan Devi, continued to look after the Gurdwara (She was popularly called Shikker Ma / mother of the Sikh). But she, too, had to flee to join her son in Calcutta when the Pakistan military government started its reign of terror. The Gurdwara fell into disuse until in early 1972 when during the war of independance and the establisment of Bangladesh a Sikh soldier was deputed, temporarily, to serve the Gurdwara. He left when his unit resturned to India.

Since that time some hand written manuscripts of the holy Granth Sahib and a portrait of Guru Tegh Bahadur done by an artist of his time and some epistles sent by Guru Gobind Singh have been discovered at the shrine.

There used to be another memorial to Guru Nanak Dev in Dacca, a well, which was blessed by the Guru. It is mentioned in Dacca district Gazetteer, Calcutta, 1912. 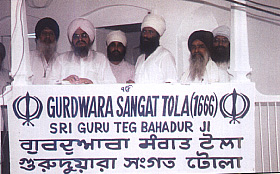 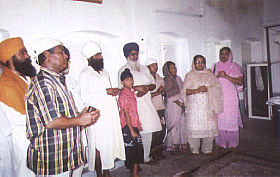 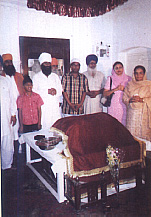 The original Gurdwara at 14 Sreesh Das Lane of Bangla Bazar, in which Guruji stayed is very dilapidated. Bangladesh Gurdwara Management Board with the active cooperation of the local committee has decided to construct a new building in its place. It also decided to grant the request of Sant Baba Sukha Singh, chief of Kar Sewa Sampardai Sarhali (Amritsar) to render his services for the construction of the new building Kar Sewa. Sant Baba Sukha Singh was then invited to visit Bangladesh and inspect the site.

In August 2005 Baba Sukha Singh along with his jatha visited Dhaka where he, after visiting the Gurdwaras, had a discussion with Shri Suresh Kumar, and the local Sangat regarding the construction of the new building of Gurdwara Sangat Tola. It was decided to evacuate the families from the Gurdwara's premises, who were illegally staying there, before the work for the construction starts. Baba Sukha Singh Ji then asked Shri Suresh Kumar to talk to the concerned families so that they are evacuated at the earliest and the Kar Sewa is started.

Baba Sukha Singh along with his jatha again visited Bangladesh in March 2006 to see the work going on there. In the meantime, Granthis and Sevadars sent by Baba Sukha Singh Ji are performing the day to day religious functions at Gurdwara Nanakshashi, Gurdwara Sangat Tola, Gurdwara Chowk Bazar, Chittagong and Gurdwara Pahar Tali, Chittagong. It is expected that Kar Sewa of Gurdwara Sangat Tola Bangla Bazar Dhaka will start soon.

There used to be an annual fair here in the month the Chet (March-april). There is however no trace of it now. The site is now covered with residential building near the present Dhan Mandi (paddy market).

At present, these two Gurdwaras are being maintained by Bangla Desh Gurdwaras Management Board [1], attached to Takht Sri Patna Sahib. Captain Bhag Singh was its first indefatigable general secretary.