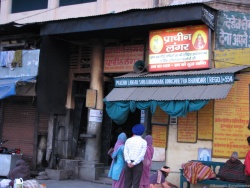 The Gurdwara is present at Har Ki Pauri and is in poor condition.

During his longest tour called first Udasi Guru Nanak visited Hardwar, a pilgrimage centre of the Hindus. It was believed that a dip by the devotee in the holy Ganges would absolve the bather of all his sins.

The Guru himself entered the river at Kushwan Ghat and started splashing water with his left hand towards the west, while other pilgrims were splashing water towards east, the direction where the sun arose each morning.

When questioned by others, the Guru informed them that he was directing water to his thirsty fields in Punjab. The priests laughed and asked him how water could reach his crops situated 460 km away. Guru Nanak politely told them if water sent by him could not reach his fields in Punjab, how could it reach their ancestors in the heaven. The Guru's reply startled the people. At first they were a bit perplexed but later began to realise the truth in the Guru's statement.

Another Sikh shrine at Hardwar

A Gurdwara constructed on the site is known as Gurdwara Nanakwara. Besides, there is another Gurdwara at Hardwar in the name of the third Guru Amar Das who visited Hardwar twenty two times during his life time.

Gurdwara dedicated to Guru Amar Das (at Kankhal near Sati Ghat) - Haridwar,the famous Hindu pilgrimage centre on the banks of Ganga River (the Ganges) was visited by several Gurus at different times, but the only historical Sikh shrine is the Gurdwara at Kankhal near Sati Ghat, three kilometres south of Haridwar. It is dedicated to Guru Amar Das and is managed by Nirmala Sikhs