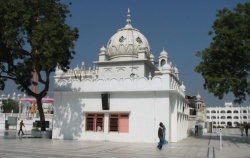 Gurdwara Daya Singh is in the city of Aurangabad, Maharashtra, India. The Gurdwara is named after the Bhai Daya Singh, one of the members of the five panj pyare who were administered Amrit by Guru Gobind Singh in 1699. Aurangabad, a district town in Maharashtra, is a railway station on the Manmad-Kacheguda section of South Central Railway. The city is located about 400 Km roughly north east from Mumbai, 1209 Km south from Delhi and 270Km north-west from Nanded.

Emperor Aurangzeb had his headquarters here when he came down to the Deccan in 1681 to quell the Maratha rebellion. Aurangabad (meaning "Built by the Throne") is named after the Mughal Emperor Aurangzeb who came to this city in 1653 (when it was called Fatehnagar) as Prince Aurangzeb when he was appointed the viceroy of the Deccan for the second time, when he renamed this city Aurangabad.

In 1706, when Bhai Daya Singh and Bhai Dharam Singh were sent by Guru Gobind Singh with the Zafarnama to be delivered to Aurangzeb, they first arrived at Aurangabad, but, finding that the emperor had shifted to Ahmadnagar, they proceeded there. There, too, they found it impossible to meet the emperor because nobody would let them approach him. So they came back to Aurangabad.

It was then decided by the Sikh group carrying out this mission for the Guru that while Bhai Dharam Singh returned to Punjab to report to the Guru and seek his advice, Bhai Daya Singh would stayed in Aurangabad with the Sikhs while he waited for his colleague's return. Meanwhile, while staying in this city, Bhai Daya Singh established contact with some influential Mughal officials through whom he succeeded in delivering the Zafarnama to Aurangzeb.

The house were Bhai Daya Singh lived in Aurangabad became a meeting place for the Sikhs, and consequently the formation of a sangat, which later developed into a Gurdwara. Situated in Dhami Mohall, it is still called "Gurdwara Bhai Daya Singh" and is regularly attended and maintained by the small Sikh population of the place.

In fact the Gurdwara is running a residential school for young boys in scripture-reading, kirtan and Sikh way of living. The present building was constructed by the local sangat in the 1960`s. The gurdwara is managed by a local committee. Sikh services are held morning and evening and important anniversaries and festivals are observed. The Gurdwara grant/if runs a class for young resident scholars in scripture reading.