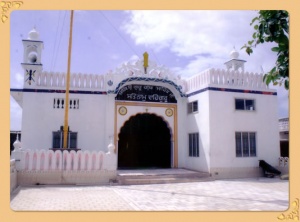 Gurdwara Bhagat Dhanna was constructed by Sant Baba Shisha Singh ji to facilitate devotees on their travels to and from the city the world knows as Nanded. Sikhs call the city Abichalnagar as the city is sacred to the memory of Guru Gobind Singh who died there.

This Gurudwara is located at Loha, about 40 km from Nanded. Loha is centrally located on Nanded Mumbai highway. For traveler from Nanded, Loha serves as a junction for roads leading to Latur, Kandhar and Beed.

Gurdwaras wherever they are located, beside being houses of worship, have long served as resthouses for Sikhs and others on their travels. They usually contain eating, sleeping and bathing facilities. The meal facility or Langar hall, is a tradition begun by the first Guru of the Sikhs, Guru Nanak. Daily around the world, thousands of free meals are served to the visitors of Gurdwaras by members of the sangats (congregations) doing sewa (donating their time and even the food in service of the Gurus' visitors).

Langars serve a simple vegetarian meal in a manner which emphasizes the equality of all. In ancient India where people were segregated into castes even the Emperor Akbar and his father the Emperor Humayun sat in a room among common men and women as they shared a common meal.