Gurdwara Amb Sahib is the historic place at Mohali (Punjab) which is located some 500m across from Gurdwara Sant Mandal Angitha Sahib. This holy shrine is the result of the blessings of the revered Sikh Guru, Guru Har Rai. Here at this location, the Guru blessed his Gursikh who as a result felt contented. "Amb" in Punjabi means mangoe.

Bhai Kuram, a lobana by caste, and a resident of village Lambian traveled to Amritsar to have a glimpse of Sri Guru Arjan Dev Ji. It was season of mangoes and the court of the great Guru Arjun Dev Ji was in place. The followers were giving their offerings. Followers from Kabul came with ripe mangoes. Bhagat Kuram felt sorry that he had came from the land of mangoes but had not thought to bring any to the Guru.

When the darbar ended that night the mangoes were distributed among the devotees as Parshad. All the followers went to their deras to retire. Bhai Kuram did not eat the mango given to him as parshad. Next day he got up in the morning, took his bath and carried the mango he had received as parshad and offered the same in darbar. 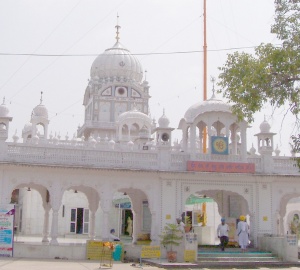 Sri Guru Arjan Dev Ji called to Bhai Kuram ji and said, "This mango was given to you as parshad but you have offered the same here". Bhai Kuram very humby bowed before the Guru and answered, "Your Highness, I have come from the land of mangoes but have not brought any for offering to You, so I retained this one for offering to you." Guru Ji ordered him to eat the fruit and promised that his offering shall one day be taken.

On the first day of Poh (mid-December), keeping his father's the previous Guru's promise, the Great Guru Sri Har Rai Ji came here from Kurukshetra, enquired about his follower and came to know that he was deeply engrossed in meditation in the garden. Guru Ji came to him and ordered Bhai Kuram to fulfill his promise of giving a mango. He, very politely, responded to Guru Ji that he was unable to offer any fruit because mangoes were not in season. You can't do what ever you feel like.

Upon listening to his reply Guru Ji asked him to look up and notice that the mangoe tree, under which he had been sitting in meditation, was now full of ripe fruits. Bhai Kuram bowed to touch the feet of The great Guru in astonishment. Guru Ji told him to offer mangoes to the sangat. Obeying the orders of Guru Ji Bhai Kuram served mangoes to the Holy Guru and the whole sangat. 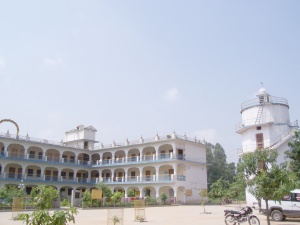 The Incharge of sarai is Sardar Bhagh Singh. There are 60 rooms with attached bathroom with 2 or 3 beds . Six halls for 180 persons . The Charges of room are normal i.e Rs 100 / day and the hall is free.