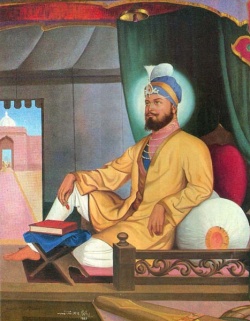 Guru Har Rai left Goindval on a tour of the districts where the Sikh faith had taken root in the time of his predecessors He traveled further on to Kashmir. The Vaisakhi of 1660 was celebrated at Sialkot in the home of Nand Lal Puri, grandfather of Haqiqat Rai the martyr. The journey was resumed in the company of Sikhs such as makkhan Shah, the Lubana trader and Aru Ram, father of Kirpa Ram Datt who later led to the presence of guru Tegh Bahadur a group of Kashmiri Pandits driven to dire distress by State persecution. Guru Har Rai arrived at Srinagar, via Martand Temple, on 19 May 1660, and visited Mota Tanda, the village to which his disciple, Makkhan Shah belonged. On his way back. He stopped at Akhnoor and Jammu. At the latter place, the local masand, Bhai Kahna, waited on him.Though no historical Gurdwara has been constructed in the state connecting Guru Har Rai sahib.