From SikhiWiki
(Redirected from Martand Temple)
Jump to navigationJump to search

Guru Nanak in the Kashmir valley 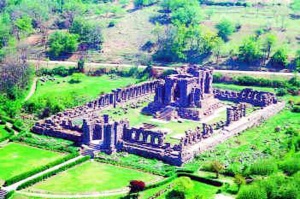 During the historical visit of Guru Nanak in the Kashmir valley, Guru Sahib stayed at the village of Mattan near Anantnag (meaning infinite natural springs) and had a discourse with Pandit Brahm Das at Martand Temple.

This temple is situated in the village of Mattan. Also called the Sun Temple. It is the only Sun Temple in Kashmir Valley. It has become a tourist site. The temple was constructed of neatly dressed ashlar slabs of Devari lime stone arranged in horizontal courses with fine joints. Iron dowels were used in binding the stone slabs.

Presently in a ruined condition, it has been preserved as a monument of national importance under the 'Archaeological Monuments, Sites and Remains Act of 1958' and is maintained by the Archaelogical survey of India.

The other Sun Temples in India are

1. The Konark Sun Temple in Orissa.

2. The Katarmal Sun Temple in Katarmal.

3. The Almora Sun Temple in Uttarakhand.

4. The Modhera Sun Temple In Gujrat

According to local legend, Surya, the Sun God of Hindu Mythology was born of Aditi from a lifeless egg called Martand. Aditi was the wife of Kashyap, the saint from whom Kashmir probably takes its name. Surya was her 13th child, the spring of Mattan is attributed to this legend. Lord Vishnu Surya has been worshipped in his Martand manisfestation. The modern name of the village Mattan seems to has evolved from the Sanskrit Martand (mart = dead / and <— anda = egg) with the passage of time.

This temple was Martand. Though Kalhana, Kashmir Historian, has given contradictory references regarding the founder of Martand. For example at one place, he has mentioned that King Randitya founded Martand. And in another book he has mentioned the name of famous warrior King Lalita Ditya Mukta Pida. The construction of the world famous Martand is usually ascribed to Lalita Ditya Mukta Pida. The king appeared to be a worshiper of Sun as an all pervading phenomenon. He also offered to the Diety “the territory of Kanyakubja (Kanauj) together with the villages.” The fact was that Kanauj King Yasho Varman had suffered defeat at his hands and this had made his task easier to march on to the bay of Bengal on Turning back, he passed through Mysore and Konkan territory where he met with little or no resistance. So his power and valour naturally would have made him 'Lalita Ditya Mukta Pida' (swelled with pride). And he paid homage to the fierce luminary by founding Martand (Sun Temple). It is now in ruins. Only some parts have survived but its pictures have been preserved in most of the books written on Kashmir.

However, one can judge the magnificence and grandeur of the temple by just casting a glance on the site, and surrounding view. It was constructed on the highest part of a plateau. It has been recorded that it had eighty four columns, a number which is sacred to Hindus. Its interior must have been extremely beautiful with the Sun entering a decorated chamber with a door way on each side covered by a pediment, with a trefoil headed niche having a bust of the Hindu Trinity. It over looked the finest view in Kashmir. Little wonder that early foreign visitors described it as the wonder of Kashmir.

There was an interesting reference that King Kalasha (11th Century A.D.) went to pray and find peace at martand a little before his death. It may be noted that Kalasha was a follower of Shaivism. The sun worship did not vanish after the 11th century A.D. because Mirza Haidar Dughlat, cousin of Babar, recorded in his famous book Tarikh-i-Rashidi that an important section of the population still worshipped the Sun. This group or sect called themselves Shamsuddin. They said that they had received the title (Sun of Religion) from the heavens. In the Kashmiri language they were called Shammasi. The Ain-i-Akbari has a reference about Sun worship in Kashmir.

There were two famous celebrities in Indian history whose obsession with the Sun was well known, one was Akbar and the other was the well known Maratha warrior Sada Shiva Rao Bhau. Akbar said his prayers four times a day reciting a thousand and fifty names of the Sun. This devotion to the Sun was so firm that Badaoni, a contemporary historian expressed surprise and recorded that no one could raise a doubt in Akbar’s mind,” even if mountains were to crumble to dust, or the heavens were to tear asunder.” The same was the case with Sada Shiva Rao Bhau who practiced the Surya Namaskar (a yoga pose) a thousand times daily.

Sun-worship went out of practice after the 16th century A.D. Now it is only done by some at the time of morning bath when the first rays become visible. But those who undergo yogic exercises usually adopt Surya Namaskar (Salutation to the Sun) as the exercise is believed to be a cure for Chronic headache and an excellent exercise for flexibility.

Guru Nanak and the Sun worshippers

Guru Nanak is known to have asked those on their morning 'throwing of water to the sun' who practised this ritual (obstensively to give a drink to their thirsty ancestors whose souls were now residing in the sun), after getting them to state the purpose (Guru Nanak Had been raised as a Hindu, whose questioning of such rituals was well known, even as a child), he turned away from the sun towards Punjab and started throwing water in the opposite direction. The puzzeled Hindu Sun worshippers asked why he was doing such, to them an obviously 'mad' thing, the Guru replied, why, I am sending water to my parched fields in Punjab.

If only we could see the looks on their faces as they, perhaps, for the first time questioned the validity of their ritual. If you look into your mind you can see the 'look' its the same one you, all of us have had, when in a moment we realise that the anger we feel over some silly incident, is really just our anger.