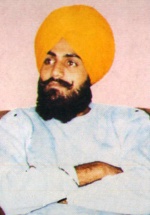 Shaheed Gurjant Singh Budhsinghwala (1964 - 31st July, 1992) was a Sikh freedom fighter and martyr. He was the chief of Khalistan Liberation Force.

Gurjant Singh Budhsinghwala was born to Nachatar Singh Brar and Surjeet Kaur Brar, in the village of Budhsinghwala, District Faridkot in the year of 1964. Bhai Sahib's family had made a living as common farmers, but Sikhi had been flourishing in the family for generations. Gurjant Singh, who had a sister, was the youngest of three sons. He had to leave school after the 5th grade, because his family needed him to join his brothers, in the fields to help ends meet. He also helped around the house and never tired of working.

He never lost faith whilst the family went through hardships and still managed to have the time for his religious studies. Religious from a young age, Bhai Sahib met Sant Jarnail Singh Bhindrawale on numerous occasions. A true Gursikh he always remained in Chardi Kala.

The government’s carnage reached the Moga area and the Bibi Kahn Kaur Gurdwara was surrounded by armed police, indiscriminate firing was opened on the sangat and many who were drenched in blood attained martyrdom. Bhai Sahib's paternal grandfather, Bhai Kehar Singh, was one of the martyrs of this incident. Bhai Sahib had much affection for his grandfather.

The Martyrdom of his grandfather had a deep effect upon his tender heart at the age of 18 years. The government tyranny, making its way throughout the Moga area, arrived at Bhai Sahib's village. Bhai Sahib was arrested and imprisoned in Ferozepur jail for one and a half years. Bhai Sahib had just been released from jail when the police re-arrested him and his brother Bhai Jagroop Singh for murder. In the ensuing interrogations by the police both Bhai Sahib and his brother were tortured severely. When they were released after 8 days of torture, they both could not walk. They both got home in the same evening. On the same night the police again entered their house and took their father, brother and paternal uncle into custody. 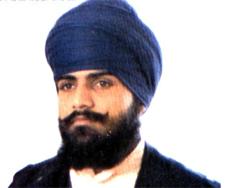 After undergoing all this oppression and torture Bhai Sahib decided to live the life of serving the Panth and left his home, to protect and fight for the rights of the people of Punjab. A tornado of fighting for justice was invested within him, after undergoing torture and oppression at the hands of the authorities. From the outset Bhai Sahib worked alongside Bhai Varyam Singh Khapiawale - after his Martyrdom, Bhai Sahib worked under the leadership of Bhai Aroor Singh of K.L.F.. Slowly, slowly Bhai Sahibs fame grew due to the missions he completed and the enemy started to fear for their safety. When the enemy used to hear the name of Bhai Sahib they used to shiver with fear.

Bhai Sahib had undertaken the leadership of Khalistan Liberation Force, after the Martyrdom of Bhai Avtar Singh Brahma in 1987. Under Bhai Sahib's leadership K.L.F completed numerous successful missions and became one of the leading freedom fighting outfits. K.L.F was founded by Bhai Aroor Singh in 1986. Back then, Bhai Budhsinghwala was appointed Lieutenant General. Bhai Budhsinghwala became the 3rd Chief of K.L.F. He was respected as the mastermind and most intelligent, Sikh freedom fighter.

A Nihang who used to live in the same village as Bhai Sahib informed the police on numerous occasions of Bhai Sahib’s actions and whereabouts. This informant helped the police arrest and torture Bhai Sahib on numerous occasions. Bhai Sahib was arrested and sent to Faridkot jail on one of these occasions. Upon release from jail - on bail, instead of going home, Bhai Sahib went directly to Shaheed Bhai Varyam Singh and became once again engrossed in seva. Bhai Sahib caught the Nihang informant and poured petrol over him and burnt him alive in the middle of the village. People of the surrounding area were happy and ecstatic at the elimination of this Nihang who caused much distress to the inhabitants of the locality.

Bhai Sahib started bringing many oppressors to justice and the police started to repeatedly harass the family of Bhai Gurjant Singh. His brothers were severely tortured and subsequently jailed. Bhai Sahib's sister's (Bibi Gurcharan Kaur's) family was tortured and harassed on a number of occasions. To try to retract Bhai Sahib from his seva, the authorities used oppressive tactics of the worst kind. His paternal Uncle Chand Singh and paternal cousin Bhai Joga Singh were martyred in a fake police encounter. His mother, father, and brothers were also terrorised. But Bhai Sahib was steadfast and did not retract an inch from his resolve.

Bhai Sahib learnt of the atrocities met out to his family, and after a while he made plans to avenge these evil actions. He along with his 3 associates Bhai Lakhvinder Singh Lakha village Dhole Ke, Ajmer Singh Lodhivaal and Bhai Darshan Singh Tarkhanbad, exterminated the S.H.O at the police station whilst he was under the guard of his bodyguards. After removing the S.H.O, Bhai Sahib and his associates fired at the police in the police station, but they locked themselves in out of fear and did not dare to return fire. Bhai Sahib and his associates left the police station at 7.30am with such calmness and braveness, no police official had the courage to even follow the Singh's after they left. The newly appointed S.H.O got the very same iron-gate reinstated at Bhai Sahib's house.

and in turn avenged the deaths of many Shaheeds.

Other prominent successes of Bhai Sahib were:

Bhai Budhsinghwala also had a hand in the kidnapping of the Romanian diplomat Liviu Radu through which Khalistanis got the message across to the global media about the Sikh struggle and state oppression.

The son of the S.S.P Des Raj Sharma of Tarn Taran was kidnapped in order to get Bhai Sahib's associates freed from the police, this was the first time a hostage was taken for political demands in Punjab and Bhai Sahib's friends were freed. 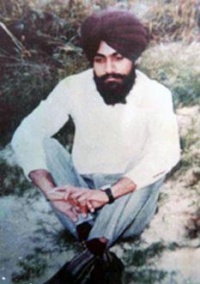 There was a bounty of 4 lakh (400,000) Rupees upon his head. Bhai Sahib was the most wanted Sikh freedom fighter and he was believed to be the mastermind of many successful actions against the authorities. The Ludhiana police had received confirmed intelligence reports that Bhai Sahib and other freedom fighters were holding a meeting at Model town extension - in house no. 95. The police along with the assistance of the army at about 10pm surrounded the house and ordered the inhabitants of the house to open the gate, but the house owner replied that he had dignitaries in attendance. According to the police the Singh's tried to escape through the back of the house, but the police had already surrounded the house and opened fire on the Singhs, one Singh got injured in the firing. Bhai Budhsinghwala did once again try escaping but due to the heavy fire he was martyred in the exchange of fire. The police claimed in their press release that Bhai Sahib was martyred within the house but all other accounts of eyewitnesses said that Bhai Sahib was martyred about 50 meters from the house in an alleyway.

This police operation was carried out by the S.S.P of Ludhiana 'Chotpadhiea' & D.S.P D.S. Gill. There were large engraftments made upon the grass around the house - where the police had entrenched themselves. The police did not return Bhai Sahib’s body to his relatives.

Bhai Sahib was a freedom loving spirit who did not enter controversies with others and all Sikh Organizations respected Bhai Sahib. Bhai Sahib used to speak very little, due to which he was able to command K.L.F for a relatively long time. Bhai Budhsinghwala was said to be wanted for 37 accomplished actions by the police. The people began to admire and respect Bhai Gurjant Singh more and more as time went by, as he was dead against thieves and robbery and he put numerous such thieves to justice.

Bhai Sahib attained Martyrdom on 31st July 1992 at the age of 28 years. The Panth will never forget the service he rendered.