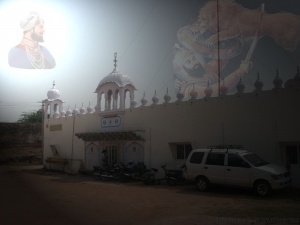 Gurdwara Sher Shikar, (Gurdwara of the Tiger Hunt) is situated in Machkund, in Dhaulpur, Rajasthan, India. This Gurdwara is connected to the sixth Guru, Shri Guru Hargobind's visit and his part in the fabled hunt. (The story is told by some as a Tiger and by others as a Lion. "Shere" can be taken for either in Persian or Panjabi.) 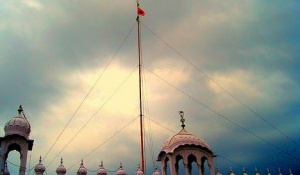 While travelling towards Gwalior, with Emperor Jahangir, Guru Hargobind arrived at Machkund on 4 March, 1612 and stayed in Bhamtipura village. The head of that area informed Jahangir of a deadly lion stalking the local villagers and asked the Emperor to save them from the lion. 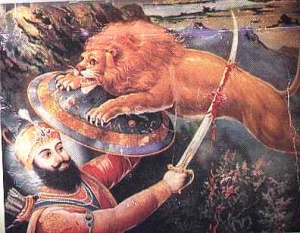 It is said that Jahangir had quickly thought to use the lion hunt as an opportunity to bring about Guru Hargobind's death. However, history records, that a very different result took place as a result of this fabled hunt.

While the Emperor's hunting party was in the forest searching for the lion, the lion suddenly charged in the direction of Jahangir. Jahangir and his soldiers quickly fired their guns and arrows missing the great beast. Fearlessly the maddened lion continued his charge toward the Emperor. Seeing this, the terrified Jahangir screamed out for help. It is said that at this point, Guru Hargobind jumped from his horse and stood between Jahangir and the lion and speaking to the lion said,

The lion attacked Guru Hargobind with his full force. Guru ji with his left hand raised his shield in front of the lion and with the sword in his right hand slashed the lion across its back killing him with the one motion. Jahangir now realised that the Guru was not only spiritually powerful but also physically powerful as well. His fearless defence of the Emperor while his own soldiers had turned their backs in fear drove that point home to Jahangir. After this incident Machkund for awhile became a site of the Udasis'.

After that the Emperor often asked Guru Hargobind to join his travels around his kingdom, but soon Chandu Shah, who had played a large part in the death of the Guru's father — Guru Arjan, hatched a plot against the young Guru.

At Agra, Jahangir was taken seriously ill. When his own men of medicine failed to cure him the Emperor had turned to the 'tired and true' method of old India — his astrologers. They blamed the alignment of the stars — the Graha's, whose very name spoke of their influence in men's affairs. Chandu Shah in league with the astrologers saw their chance to stem the growing influence of Guru Hargobind. After all it was Guru Nanak who had called such divining into question, teaching his followers to turn their backs on such superstitions. The king was told that only a holy man offering prayers at Gwalior Fort could save his life. They said that their was none holier than Guru Hargobind, the Emperor's new friend. The request was soon related to Guru Hargobind. 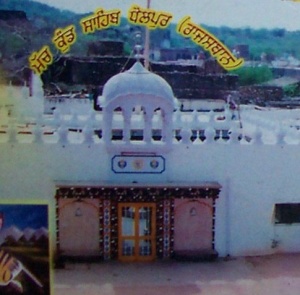 The Guru, suspicious of Chandu's intrigues in the request by the Emperor, gladly travelled to the fort with five companions to undertake prayers for the Emperor's recovery. At that time, 52 Indian princes were jailed under terrible conditions in the fort.

The Guru had the princes' conditions improved and asked the men to join him in his daily prayers. It is related that Chandu Shah gave orders to the Governor of the fort to have the Guru's food laced with poison, little did he know that the Governor, Hari Das was an ardent admirer of the Guru.

Soon Jahangir's illness ended but the Guru was left in the Fort where he soon began to think of himself as also being a prisoner. But an admirer of the Guru in Jahangir's court reminded him of his debt to Guru Hargobind and his release was ordered. The Guru refused to leave unless all the princes were released. Resistant to the request the king soon gave in and freed the long suffering men.

Today the part of Gwalior fort where the Guru stayed is known as Bandi Chor (the releaser of the imprisoned). 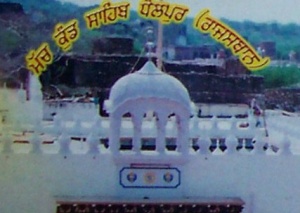 For awhile, after the Guru's slaying of the Lion, Udasi sadhus (religious sages) did Gurbani kirtan and maintained a free Langar (kitchen) at this place. Later the Udasi sadhus abandoned the site and it was rarely visited. The Maharani of Dhaulpur, who was a daughter of Maharaja Patiala found the sacred place and Guru Granth Sahib prakash was done here.

Sant Baba Thakur Singh who was at Hazur sahib, while returning to the Punjab heard of Guru Hargobind's deeds at the site and paid a visit there. He found an old thara sahib (platform). A small sword and Kundals were unearthed here at a depth of nearly 5 meters. After that the site gained in popularity.