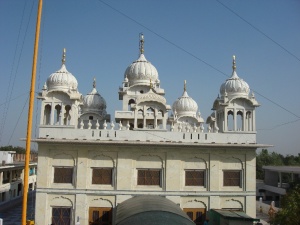 Gurdwara Puddha Sahib(also Called Gobindgarh Sahib) is a famous Sikh Gurdwara located in Village Puddha, about 1 kilometre from Zirakpur near village of Singhpura.

Baba Bhikam Singh meditated at this place. to the renowned saint Peer Buddhu Shah. Peer Buddhu Shah Sons died in Battle at Bhangani. He devouted to Guru Gobind Singh. His Nephews were bapitized by Guru and Made Sikhs. One of his nephew of Peer Budhu Shah i.e Baba Bhikam Singh meditated at this place. When Baba Banda Singh Bahadur attacked at Sirhind to kill Wazir Khan then he came to Chapan Chiri which is nearer to this place Baba Bhikam Singh also joined his kaafila and attacked with them. After that he came here and meditated. He has meditated for many years and this place is blessed that who will come at this place will get his fulfill true. After his death there was a cementry made. The older Baba Baba Ram Singh jee founded this place. and Made a Magnificiant Shrine and installed Guru Granth Sahib. 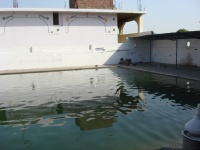 The sacred pool is called "Amrit sarovar" and nobody is allowed to enter into the sarovar. The attendees are not allowed to enter the holy pool to bath but have to use buckets to remove the water to have a shower. As the sarovar is considered sacred, the water is used for drinking. The water comes from the well where amrit is prepared and poured into the well. This pure water (Amrit Jaal) is used for drinking and also is taken take away by the gallons for use in the devotees' homes due to its sacred properties. It is said that by taking this "Amrit", a lot of the members of the sangat (congregation) have derived many benefits and recovery from many illness. So this water is considered to have special properties and is considered a cure for many ailments.

Notice board with a message 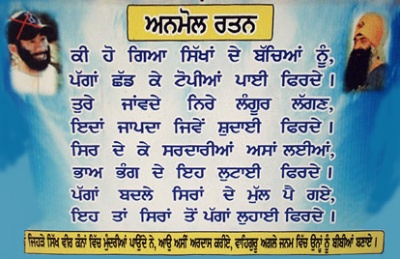 Notice board seen at Gurdwara Pudha Sahib highlighting the value of turban!

"What's happening to these Sikh kids,
abandoning their turbans they wander about wearing caps."

"Walking around they just look like monkeys
they appear just as if they are mad."

"By giving our heads we obtained respect
enslaved to drugs, they have lost their heritage'""

"Because of the turban, a price was put on that head
abandoning their turbans they wander about wearing caps'""

"Lets pray for those boys who use to put earings, that god make them girl in their next birth"