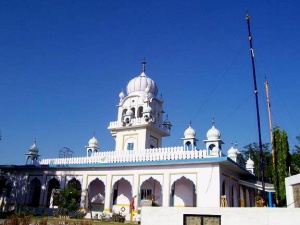 Gurdwara Peer Bala Sahib is a wonderful shrine situated at village Dadi Kothi 15 Km away from Mahilpur (District Hoshiarpur). Sited on a small hill, it comemorates Guru Nanak's visit. This shrine is under the control of the Tarna Dal Gurdwara Harian Vailan. This gurdwara was founded and built in 1954-55 by Baba Harbhajan Singh Nihang Taruna dal. The name of gurdwara, Peer bala, means the Peer of Bhai Bala i.e Guru Nanak Dev.

Acc. to the history board, The one in one spiritual power, the king of Sikhism, Guru Nanak Dev visited this place. From here guru nanak went to baghdad city for the marriage of Raja Bharthari. Raja Bharthari after leaving his kingdom came to Sidhs & Jogi and resided with them. His marriage was arranged with the daughter of Raja Bhadrasen and he had to reach bagdad in one day. Sidhas and Jogis were unable to send raja bharthri to baghdad in such short period of time. Raja Bharthri felt sad and went to other hill where he ran into guru nanak dev. He told his whole story to guru nanak dev. Guru nanak told him to close eyes, in just a second he and guru nanak were in baghdad. After the marriage he brought him back to siddhas. Siddhas felt ashamed and caught the feet of guru nanak dev.

The history collides with gurdwara sahib in Takhtupura. This Gurdwara was discovered very later and same history is present on history board. It may be due to negligence of authorities