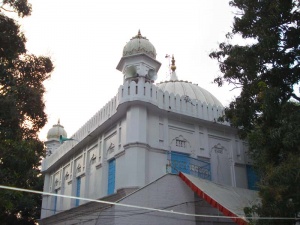 The words "Harian Vailan" can be translated as:

So together the word "Harian Vailan" means "green vines".

It is situated in bajraur, 10 Km from Hoshiarpur near Chabbewal.

Gurdwara Sahib Harian Vailan is that sacred place, where Guru Har Rai, the seventh Sikh Guru started from Kiratpur and reached here with his wife and 2200 Horseman army on 1651E samat 1708 vikrami. Guru Sahib stayed here for three days. After watching the deep devotion and love of Baba Prajapati, Guru ji stayed here at his house. The present Gurdwara is that sacred place where the Guru stayed.

During the Guru Sahib's visit many devotees gathered at this place, as the Guru, enlightened and gave spiritual advise to the sangat and (or) delighted crowds. The Guru presented the sweet word from Gurbani and explained to the congregation the benefits of threading the righteous path established by Guru Nanak.

At this sacred place Sahibzada Ajit Singh, the oldest son (or sahibzada) of Guru Gobind Singh, arrived with 100 Singhs via Mahilpur, Shahidan Ladhewal and Chukhandi Sahib, Bajror in 1703 (1760 Bikrami). Sahibzada Ajit Singh came for a stay at this Gurdwara after securing the release of a Brahmin Paras Ram’s wife from the hands of Zabar Khan. Many Singhs got martyred after fighting with Zabar khan, whose cremation ceremony (antim sanskar) was done at Shahidan Gurdwara. This marble clad thara (platform) is situated on the right side of the entrance of the Gurdwara's main building, the Darbar Sahib. It has a blue coloured Nishan Sahib. Then they took Zabar Khan to Anandpur Sahib before Bharat Shah got order to dig a hole, put Zabar Khan in it and fire arrows. They did the same.

Green Climbers
Straight towards the entrance to Darbar Sahib, the green climber is firstly visible. There is one date tree inside it and the climbers are standing with the help of iron rods. It is said that the leave remain green if you do not touch it.

On the east side of Gurdwara, a Moti Sarovar is situated. That Sarovar is not used for ishnaan (bathing) purposes. It is inside shrubs and herbs (jhariyaan). The soma is there just as a remembrance. Another Sarovar made with it where people bath mostly congregation on Vaisakhi.

The Seva of the Gurdwara is under Sant Baba Nihal Singh. This shrine is also the center of Sikh & Gurmat Parchar.