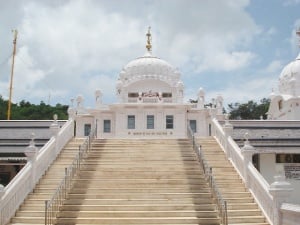 Gurdwara Nanak Jhira Sahib is a Sikh historical shrine situated in Bidar, in Karnataka. It is located at a short distance off one edge of the plateau on which Bidar is located, and there are sweeping views of the plains as you descend down the road to the present Gurdwara.

About 4 to 5 lakh (half a million) pilgrims and tourists visit Gurdwara Nanak Jhira every year. During the three melas (main events/festivities) held during Holi in the month of March, Dashera in October and Guru Nanak’s birthday in November, the numbers of visitors swells to about 30,000 a day. 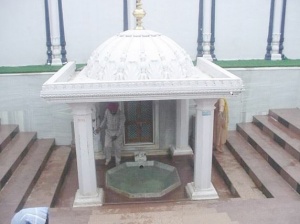 During his second Udasi (second missionary tour) of South India, Guru Nanak after sojourning through Nagpur and Khandwa visited the ancient Hindu Temple of Om Kareswar on the Narbada and reached Nanded (where 200 years later Guru Gobind Singh spent his last days). From Nanded he proceeded towards Hyderabad and Golkonda where he met Muslim saints and then came to Bidar to meet Pir Jalaluddin and Yakoob Ali.

The Guru accompanied by his companion Mardana stayed in the outskirts of the Bidar town where 'Nanak Jhira' Gurdwara is now located. Nearby were huts of Muslim fakirs, who took keen interest in the sermons and teachings of the great Guru. The news soon spread throughout Bidar and its surrounding areas about the holy Saint of the North and large number of people started coming to him to have his "Darshan" and seek his blessings. There used to be acute shortage of drinking water in Bidar. All efforts of the people to dig wells were of no avail. Even when wells produced water the water was found to be unfit for drinking. 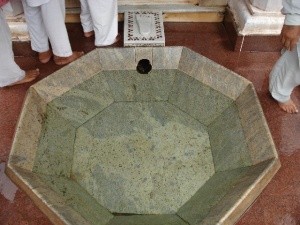 The Guru was greatly moved by the miserable condition of the people. With divine name on his lips and the mercy in his heart he touched the hillside with his toe and removed some rubble from the place. To the utter surprise of all, a fountain of sweet, cool water gushed out of the hillside. The place soon came to be known as 'Nanak-Jhira'.

A beautiful Gurdwara has now been constructed by the side of the fountain. The water of the fountain is collected in a small 'Amrit-Khud' built in white marble. There is a free kitchen (guru ka langar) where free food is given to pilgrims 24 hours night and day. A Sikh museum has been built in the memory of Guru Tegh Bahadur, depicting the important events of Sikh history through pictures and paintings. The birthday of Guru Nanak and the Hola Mohalla festival attract large numbers of devotees from all over India.

At the spot where the spring originated, the management had an Amrit Kund built with the contributions of devotees. With the water channeled into a sarovar close by, the devotees now take dips in the sacred water which is thought to cure several ailments.

The management of Gurdwara Sri Nanak Jhira Sahib now runs a free hospital, an engineering college, a Polytechnic, a college and two schools, one of them being in Hyderabad.

It may be recalled that Bhai Sahib Singh, one of the Panj Piaras (five beloved of Guru Gobind Singh), hailed from Bidar where he was once a barber. He was the son of Gurunarayana and Ankamma from Bidar.

Another version of Guru Nanak's visit to Bidar has him visiting a Sufi saint who lived with his family and followers here - amidst a source of fresh, sweet water - and that is where the Gurudwara eventually came to be. Whatever the origin, the presence of this important Sikh shrine and the sizable Sikh presence is one of the many layers of Bidar that we encounter. In the course of his tours across the area people thronged to hear him. Guru Nanak listened to their complaints that only brackish water could be found in the area.

Pir Jalaluddin and his followers from the nearby Muslim monastery also paid obeisance to the Guru and impressed upon him the need for sweet water in Bidar. In deference to their wishes, the compassionate Guruji uttering Sat Kartar shifted a stone with his wooden sandal, and lo and behold out gushed a spring of sweet water that has flowed to this day.