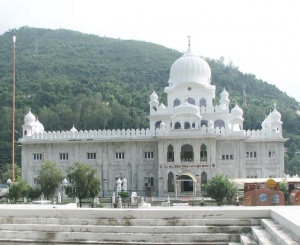 Gurdwara Guru Gobind Singh Ji with its Sarovar in the foreground.

Gurdwara Guru Gobind Singh Ji is situated in the town of Mandi. The Dasvin Patshah came to visit the area on the invitaionof Mandi's ruler Raja Sidh Sen. Guru Gobind Singh stayed here for a little over six months. His tents were set up on the bank of the nearby River Beas, while the Raja's family accomodated the Mata ji's in the Palace.

The Inner place is maintained by the Rulers family. When Guru Sahib was about to leave Mandi, Raja Sidh Sen asked him who would protect Mandi after his departure, who will save us from Aurangzeb's cruelty. The Raja asked his question just as the Guru aimed his banddukh at a clay pitcher floating down the river. The Guru's musket ball pierced the pitcher adding one more hole than its maker, some unknown potter, had given it, but even with that extra hole it continued to float down stream.

The Guru used the still floating pitcher as a metaphor to enforce his answer.

"As this pitcher was saved, so shall Mandi be saved
If anyone tries to loot it, musket balls will rain from the sky

Some of Guru Ji's belongings are still preserved here; a Bed, a Rabab (musical instrument), a Bandukh (Musket/Gun), a Gun Kuppy (powder horn) and a Talai (Mattress). There's also a rock in the River Beas on which Guru Sahib is known to have often sat in meditation, during his stay in Mandi.

Guru Gobind Singh was known to be an excellent marksman, both with a musket or with a bow. Some of his arrows, which were weighted with an ounce of gold, still exist in collections in Punjab. The ounce of gold was added to afford medicine for any attacker not killed by an arrow shot by the Guru. However, more often than not, the gold served to support of the victim's surviving family members.

One wonders if gold was used as well for the Guru's goley (musket balls).

Please, click on the photos of the Darbar Sahib or the Guru's personal items, on display, to enlarge.