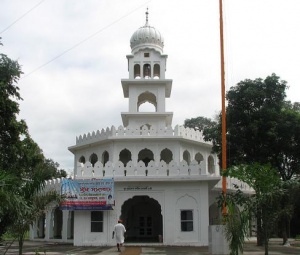 Gurdwara Gurpalah Patshahi Dasvin is situated in Bathu village in Una district is 15 kilometers west of Nangal in Punjab along the Nangal-Garhshankar road. The Pious Shrine is related to Guru Gobind Singh.

According to local tradition, he arrived here from Bibhaur and held a discourse with Baba Kaladhari, a direct descendant of Guru Nanak Dev, under a Palahi(Plaha is a Tree called Plaas which is tree called Butia Fonzosa. The Tree of Kesu <-----Acc to mahankosh) tree on the bank of Suan River, one furlong east of the village. The commemorative shrine established here is called Gurdwara Gurpalah Patshai Dasvin.

It is housed in a small domed room built during the reign of Maharaja Ranjit Singh. It is a scheduled Gurdwara (Serial No.137) managed by the Shiromani Gurdwara Parbandhak Committee through a local committee.