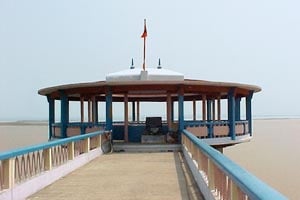 Gurudwara Baoli Sahib is associated with the first Guru, Guru Nanak Dev ji who came here during his Third Udasi or travel in 1514. The story is told that the yogis, using magical 'occult powers', dried up all the water in this area. They then challenged Guru ji to bring water here. Guru Nanak Dev ji instructed Bhai Mardana to pick up a spade and go to the nearby river. He told Bhai Mardana to drag the river behind him with the spade. Bhai Mardana did as instructed and the river started to follow him as he dragged his spade over the ground. When he reached this place, Bhai Mardana looked back to see if the river was coming behind him. Immediately, the river stopped following him and stopped at this place. When the river stopped its flow, Guru ji asked the yogis to use their occult powers and move the river further. However much they tried, the yogis could not do so. They realized their fault and fell at the feet of the Guru, accepting their defeat. A baoli was constructed here thereafter.

Gurdwara Baoli Sahib, Nanak Mata is located on the banks of the river Ghagghar in the town of Nanak Mata, district Udham Singh Nagar, situated near Nanak Sagar Dam. It is about one and a half kms from Gurudwara Nanakmata Sahib.

There is no gurdwara as such at this site as a dam has been constructed here. However, the baoli exists and a Nishan Sahib has been established to mark the site. A few sewadars are always present at the site.