Garland around my neck 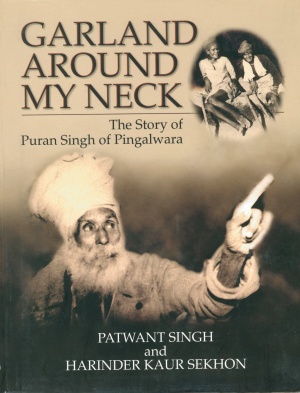 Garland Around My Neck - The Story of Puran Singh of Pingalwara

Garland Around My Neck - The Story of Puran Singh of Pingalwara Tribune article Saturday, March 10, 2001

WHEN Harinder Kaur Sekhon was offered to co-author a book on Puran Singh, the great humanist and founder of Pingalwara in Amritsar by Patwant Singh (author of The Golden Temple and The Sikhs), she jumped at the opportunity to work with him. This opportunity, which she says was "a magnanimous one", slowly turned out to be a voyage of discovery. She learnt about the amazing life and work done by this man who had dedicated his life to the concept of sewa, the most important ideal in Sikhism. This voyage has culminated in the publication of Garland Around My Neck, on the life and work of Puran Singh with photographs of Pingalwara, adding an exciting visual dimension to the book.

The most amazing feat of this unassuming social worker was the way he looked after a child he found abandoned in Lahore in 1934. Carrying this dumb, mentally impaired and incontinent boy whom he named Piara (the loved one) on his back for 14 long years became "symbolic of his carrying all….the aged, infirm, disabled and the sick on his shoulders". It was no easy task as the helpless boy’s hands and feet were lifeless and he would constantly drool on Puran Singh. Yet, whenever Puran was asked about Piara, he would say that he considered him "a garland around my neck".

This was the most significant aspect of Puran Singh’s life that drew Patwant Singh to learn more about the contributions made by him to society. "I was drawn by the amazing will power, by the selflessness and single-minded pursuit of his humanitarian goals. The more I looked at the course of his life, the more impressed I was by how clearly he had defined these goals for himself: the care of the disabled, destitute, hopelessly ill, mentally challenged and despairing segments of the Indian society", says Patwant Singh. "His lifelong commitment to the ideal of sewa was in itself impressive enough but what finally convinced me to write about him was the specific form which he gave to it and the consistency with which he toiled unrelentingly to achieve his objectives for the most of the 88 years of his life".

The exploration of the life of Puran Singh or Bhagat Puran Singh as he later came to be known, naturally led Patwant Singh and Sekhon to Pingalwara. "Puran Singh’s spirit definitely seems to be the motivating and guiding factor behind Pingalwara even today. The employees say that they still feel that they are working for Puran Singh. There isn’t a single voice of criticism or dissent against him, his work or the genuineness of his concern and compassion", says Sekhon.

While writing about the life of Puran Singh, the two authors met a cross-section of people who had been associated with Puran Singh since his childhood. Says Patwant Singh, "The material on the first 43 years or so on his life is meagre and limited to either his own notes or recall of the people who had known him or of him, but the vitality of the oral tradition helped fill gaps in the story which would have otherwise remained incomplete".

"It is a moving experience to arrive at Pingalwara and see how some of those who would have been left to die by the roadside uncared for and unmourned, now have a clean and caring home in Pingalwara", says Sekhon. At the time of Puran Singh’s death in 1992, Pingalwara had six major self-sufficient and well-designed buildings for taking care of the destitute and the disabled. This is especially creditable when one considers that the money for these buildings had come from the sangat in denominations of one, two, five, ten and fifty rupees. The bigger sums came much later, long after he had endured endless hardships during the early years when he went around the streets of Amritsar with Piara on his back and a collection box and bell in hand to attract people’s attention.

Patwant and Sekhon discovered that Puran Singh had touched the lives of hundreds of people. Amrik Singh, a humble rickshaw-puller who comes to Pingalwara every day to donate what he earns from his first customer, is one such person who has been influenced by the work done by Puran Singh. One of the incidents that impressed the authors is related to Rajinder Singh who had worked as secretary to Puran Singh and who drove them from Amritsar to Rajewal (Puran Singh’s village). Rajinder Singh saw a decomposed carcass of an animal, he stopped the jeep, went to the carcass, moved it to a nearby field, dug a pit for it with a shovel he always keeps in his vehicle and buried it because he believes, as Puran Singh did, that all animals are God’s creatures and deserve to be treated with dignity. In Pingalwara itself, there are numerous inmates who have been influenced by the philosophy of Puran Singh. One of them is 19-year-old Manjit Kaur. She has been struck by polio but she remains very cheerful and happy. She wants to spend her life teaching kirtan.

Garland Around My Neck is well illustrated with photographs. The recent photographs have been taken by Deidi von Schaewen who flew in from Paris and motored through Punjab in the hot and humid month of August. The archives of Amritsar’s Sewa Studio were also delved into to find photographs of Puran Singh dating back to 1951. This photographic record has been maintained because of the admiration of the studio owner’s father for Puran Singh.

And thus Puran Singh continues to touch the lives of people.