From SikhiWiki
(Redirected from Bibi Dr. Inderjeet Kaur)
Jump to navigationJump to search 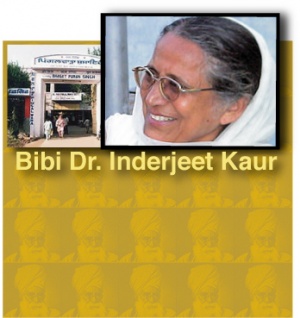 Bibi Dr. Inderjeet Kaur (Born January 25, 1942) who is the head of the Pingalwara organisation is the daughter of Dr. Harbans Singh. She earned her Academic F.Sc. (Medical), in 1959 and her Professional M.B.B.S. from the Govt. Medical College of Patiala, Punjab, in 1967. She worked as a P.C.M.S. Doctor under the control of the Directorate of Health Services, Punjab from 1967 to 1973 and has run her own private nursing /maternity home in Sangrur, Punjab since 1973.

Pingalwara was the name given to a humble house for the destitute in Amritsar in the northern Indian state of Punjab. In the early 1900's, it was an original idea of the founder, Bhagat Puran Singh to cater to the people who had been rejected by society. It was an ad-hoc facility for the disabled; the mentally ill; the dispossessed; generally for people who were no longer accepted by anyone in society. Bhagat Puran Singh built this institute literally single-handed with the ideals of his mother as his driving force; the message of Gurbani as a beacon and the generosity of the Punjabi society as his safety net and hunting ground.

Today, the Pingalwara complex is housed in a three storey building near the main Amritsar bus stand on the National Highway no. 1, also known as G.T. or Grand Trunk Road. Currently Pingalwara has facilities for 400 "patients" who are fed, housed and looked after, thanks to generous support of various philanthropists. Pingalwara is officially registered as All India Pingalwara Charitable Society. Since the death of its founder, Bhagat Puran Singh in 1992, it is headed by Bibi Dr. Inderjit Kaur who is a physician by training and also runs a private maternity clinic in Amritsar.

On January 25, 2008, she was awarded the 'Padma Bhushan', the country’s third highest civilian award, in recognition of her social service. In December 2008, she was honoured by the National Commission of Minorities, for her grass root efforts to promote the rights of minorities and communal harmony in India.

The word Pingalwara means a house or asylum for the disabled, handicapped or crippled.

Ramji Das, who, for fourteen long years, carried a handicapped child on his shoulders as they had no place to stay later became known as Bhagat Puran Singh, after becoming a Sikh. He started the Pingalwara Society which has become a household name among Sikhs because of the extraordinary humanitarian work of the man who began collecting the deserted and downtrodden of society more than 80 years ago.

Other Achievements of Dr. Kaur

Inderjit Kaur has been honoured by the National Commission of Minorities, for her grassroot efforts to promote the rights of minorities and communal harmony in India.

Inderjit Kaur, is a member of the Indian Medical Association and Patron President, All India Pingalwara Society of Amritsar and her outstanding contribution to strengthen the country's secular and democratic edifice.

Minorities Rights Day observed to commemorate the UN Declaration on the Rights of Persons belonging to national, ethnic, religious or linguistic minorities in 1992.

All-India Pingalwara Charitable Trust’s president Dr Inderjit Kaur (66) is going to be awarded with the prestigious Padma Bhushan for her work in the field of social service. Interestingly, the chief got the news on her birthday that is today.

Earlier, the founder of Pingalwara, Bhagat Puran Singh had received the Padam Shree but he returned the award in protest against Operation Bluestar. Talking to The Tribune, Dr Inderjit Kaur said the award was a result of the Trust’s team work. “I am delighted to hear the news,” she added. Popularly known as Bibi Ji, Inderjit came into contact with Bhagat Puran Singh in late 1960s and was made his successor. Dr Inderjit expanded the charitable trust and opened a branch at Mannanwala near Amritsar.

The Pingalwara provides shelter to 1,300 persons who are disabled, terminally ill, old or abandoned. Besides, it runs three schools where children from economically weaker sections are taught.