From SikhiWiki
(Redirected from Divali)
Jump to navigationJump to search 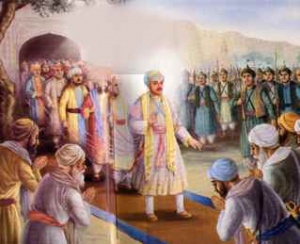 When the Guru reached Amritsar, coincidently it was Diwali - hence it added another happy moment to the previous celebrations enjoyed by the Sikhs and Hindus alike.

Diwali or Deepavali is a significant religious festival in mainly the Hinduism religion but is celebrated in Sikhism, and Jainism as well. It is also popularly known as the "Festival of Lights" and is a lunar-calendar based event that occurs between mid-October and mid-November. The word "Diwali" is a contraction of "Deepavali" which translates into "row of lamps". Diwali is an official holiday in India, Nepal, Sri Lanka, Myanmar, Mauritius, Guyana, Trinidad & Tobago, Suriname, Malaysia, Singapore, and Fiji.

For Jains, Diwali marks the attainment of moksha or nirvana by Mahavira in 527 BC. For Hindus, Diwali is one of the most important festivals of their religious calendar and is celebrated in families by performing traditional activities together in their homes. This involves the lighting of small clay lamps filled with oil to signify the triumph of good over evil. These lamps are kept on during the night and one's house is cleaned, both done in order to make the goddess Lakshmi feel welcome. Firecrackers are burst in order to drive away evil spirits. During Diwali, all the celebrants wear new clothes and share sweets and snacks with family members and friends.

Sikhs celebrate Bandi Chhorh Divas to mark the return of the sixth Guru, Guru Hargobind Ji, who was freed from imprisonment and also managed to arrange the release of 52 Hindu kings (political prisoners) at the same time from the famous fort of Gwalior by making clever use of Emperor Jahangir's orders. Jahagir had ordered that to allow anyone who could hold on to the Gurus coat tails to leave the fort with the Guru (October, 1619).

And so the kings/rajahs were freed and the Guru became known popularly as the "Bandi Chhor" (Deliverer from prison). He arrived at Amritsar on Diwali day and the Harmandar (also known as the "Golden Temple") was lit with hundreds of lamps to celebrate his return and hence the day came to be known as the "Bandi Chhor Divas" ("prisoner release day", "freedom day"). (from wikipedia) An important Sikh event associated with Diwali is the martyrdom of the elderly Sikh scholar and strategist Bhai Mani Singh in 1737. Bhai Mani Singh was the Granthi (keeper/reader of Sikh scripture) of Harmandir Sahib (popularly known as the Golden Temple). He transcribed the final version of Guru Granth Sahib dictated to him by Guru Gobind Singh in 1704.

Bhai Mani Singh assumed charge of Harmandir Sahib's management in 1708. In 1737, he received permission from Zakariya Khan, the then Mughal governor of Punjab, to hold a religious gathering of the Khalsa for celebrating Bandi Chhorh Diwas on the auspicious day of Diwali for a large tax of 5000 Rupees. He expected to put together the required sum from contribution made by the Sikhs who would assemble that day. But on discovered Zakariya Khan's plot to kill the Sikhs during the gathering, he sent out messages warning them not to turn up for the meeting. As a result the tax could not be paid and Zakariya Khan ordered Bhai Mani Singh's execution at Lahore.

Ever since the Bandi Chhorh Diwas celebrated during Diwali is also commemorated the martyrdom of Bhai Mani Singh. It is also believed that this event along with other Sikh martyrdoms gave further momentum to the Khalsa struggle for freedom and eventual success in establishing the Khalsa rule in the north of Delhi.

Uprising against the Mughal Empire

(from wikipedia) The festival of Diwali became the second most important day after the Baisakhi, when Khalsa was formally established by the Tenth Guru Gobind Singh in 1699.

The Sikh struggle against Mughal Empire's atrocities on non-Muslims, especially on Sikhs, which intensified in the 18th century, came to be centered around this day. After the execution of Banda Bahadur in 1716, who had led the agrarian uprising in Punjab, the Sikhs started the tradition of deciding matters concerning the community at the biennial meetings which took place at Amritsar on the first of Baisakh and at Diwali. These assemblies were known as the Sarbat Khalsa and a resolution passed by it became a gurmata (decree of the Guru).

Diwali is celebrated by Sikhs because Guru Hargobind returned to Amritsar after his imprisonment at Gwalior where he also won the freedom of 52 innocent Princes who had long been imprisoned at Gwakior for political reasons.

Bhai Gurdas narrated the whole story telling us what happened: Guru Hargobind, the sixth Guru, had been arrested for political reasons. The Mughal Emperor now decided that the religious fundamentalists that had been behind the martyrdom of the fifth Guru, Guru Arjun, were a greater threat to his throne.The Mughal Emperor, therefore, offered to free Guru Hargobind but Guru Hargobind refused to take his freedom until 52 princes who had also been detained for political reasons were also freed.The Emperor offered that all those who could hold the Guru's cloak could go free. 52 tassles were attached to the Guru's cloak and holding to his cloak all the 52 princes went free.

In addition to Nagar keertan (a street procession) and an Akhand paath (a continuous reading of Guru Granth Sahib), Diwali is celebrated by an awesome fireworks display. The Golden Temple as well as the whole complex is festooned with thousands of shimmering lights, creating a unique jewelbox effect.

The story of Diwali is the festival of lights when, according to Indian lore, Lord Rama returned home after destroying the demon god Ravana who had taken away Rama’s wife, Sita.

This Shabad is by Bhai Gurdas Ji: www.sikhitothemax.com