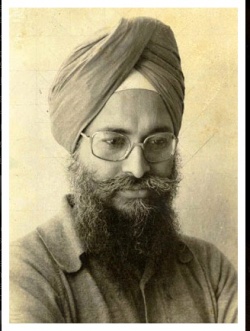 Bhai Devender Singh (b. 6 November, 1947) is an Indian painter and illustrator from Punjab who has specialised in oil painting with themes from Sikhism and Punjabi popular culture. He has produced hundreds of painting many relating to the Sikh Gurus and their history.

Some of his book images are used on this site. He is honoured as an artist who has given the most to providing an important visual dimension to the history of the Sikhs, which had been lacking previously. Many newcomers to Sikhism can relate to the history of this new faith through the imagery created by Bhai sahib ji.

“Every artist dips his brush in his own soul and paints his own nature into his pictures”, Devender Singh repeats the words of Henry Ward Beecher on his website. A self-made man, Devender Singh has stated, “If we were to follow Guru Nanak’s one line teaching - Kirt karo, naam japo, wand ke khao (work, pray and share) - life would be a utopian dream.”

Bhai sahib was born on 6 November 1947[1] in Amritsar, Punjab. His father, Sewak Singh (G.D. Art Lahore), was also a well-known artist himself.

Bhai sahib received his formal education at Mumbai, Ludhiana and Chandigarh.[2] and is now based in Chandigarh India. He admits that he inherited the gift of painting from his father Late S. Sewak Singh. After completing his formal education, he took to the canvas and spent many hours each day perfecting his art and producing a huge variety of paintings.

His religious paintings are used in many books and comics and bring alive the significant and glorious moments straight out of the Sikh history. He illustrated for the well-known Amar Chitra Katha publications. His comics were widely read in the India in the late 70’s. Subsequently, these book and comic paintings made Devender Singh an internationally renowned artist, making him the foremost recipient of many awards and honours. At present his paintings adorn the walls of many Sikh Gurdwaras (temples) and museums across India and also abroad. In 1999 BBC, London made a documentary film on his life.

His well-known paintings include the series made on Bara Maha, which is Gurbani based on compositions on seasons by Guru Nanak in raag Tukhari and by Guru Arjun Dev in raag Majh.

However, Devender Singh’s paintings are not limited to just Sikh history; one of his much appreciated painting featuring Radha and Krishna has drawn much praise and appreciation.