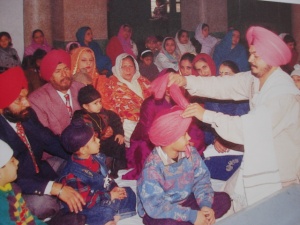 In many families, when a boy reaches a certain age (usually eleven to sixteen), he is taken to a Gurudwara and there, in the presence of the Guru Granth Sahib and following Ardas, his first turban will be ceremonially tied on by the Granthi, an elder relation or another Sikh elder. The Granthi will explain the importance of keeping long hair and wearing a turban.This ceremony designates the respect with which the turban is regarded. The Turban is such a crucial article of faith that many Sikhs consider it to be more important that all the other Ks. Turbans may be of any color, and is tied in many different ways and styles.

After the Dastar Bandi Ceremony and his initiation into the Khalsa, the young Singni is to incorporate the Five Ks in his everyday appearance (uncut hair, steel bracelet, wooden comb, cotton underwear and steel dagger).

Becoming a Man by RICK ROJAS

Guransh Singh knelt at the altar of Guru Granth Sahib as the granthi (elder) and uncles unfurled yards of a salmon-colored fabric. His family and friends, beaming with pride, sang in the gurdwara as the men crowded around the 14-year-old, tucking and tying, until they had wrapped his head with a turban for the first time.

With that, Guransh became a man.

Like a bar mitzvah or confirmation, he went through a rite of passage in the Sikh faith Saturday, marking the time when he was firm enough in his beliefs to make a lifetime commitment.

The turban-tying ceremony, called Dastaar Bandi or Dastaar Saajni, included hymns and prayers accompanied by musical instruments rooted in the religion's heritage. Sikhism, one of the world's largest religions, is not related to Islam.

According to their beliefs, Sikh men and women cannot cut their hair and are required to keep their their heads covered.

"For a Sikh, it is a beautiful ceremony," said Sartaj Singh, a member of the gurdwara at the Guru Gobind Singh Foundation in Rockville; he works with the temple's youth. "He is going to be walking forward in society with a turban on, and this is a way to say that we are with him."

And, as many Sikhs say, carrying out their faith in American society does come with difficulties in the post-Sept. 11 world. The image of Sikhism - men with turbans and untrimmed beards - has led to misconceptions. Mistaken for Arabs and/or Muslims, some Sikhs have been subjected to slurs and discrimination.

There have been cases in which a Sikh's hair has been cut, and some of the perpetrators have been prosecuted for hate crimes. It even shows up on television: the dunderheaded manager in the NBC sitcom "The Office" fears that the Sikh IT worker is a terrorist.

Sarabjeet Singh, a 26-year-old lawyer from Falls Church, said he has been called Osama bin Laden and been given dirty looks while riding the Metro train. The situation has created an "identity crisis" for Sikhs, Sartaj Singh said. Many young Sikhs cut their hair or trim their beards to blend in.

But Guransh's father, Rajwant Singh, said his son has become "conscious of his faith" and is mature and knowledgeable enough to live it in his everyday life.

During the hours-long service at the gurdwara Saturday, Guransh stood next to the Guru Granth Sahib - the Sikh Scripture - which was on a throne-like altar because it is treated like royalty (The Living Word!). He sang a hymn and performed on the harmonium, an air-based piano, and the tabla, a percussion instrument. The singing - know as kirtan - is central to a Sikh religious service.

Guransh has prepared for the event since last summer.

The leader of the congregation, Bhai Gurdarshan Singh, said that the youth, usually in their early teens, must understand that what they are having tied on their head isn't simply a turban. In Punjabi, "dastaar" means a crown, a central article of the Sikh faith.

"It is not to tell others who we are," he added. "It is a reminder to myself who I am."