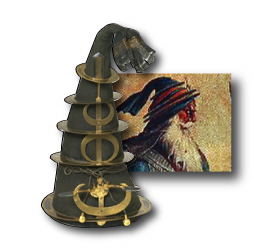 The chotta Chakkar or chakram (the small ring) is a steel ring, 5 - 12 inches in diameter of varying thickness. When used in battle, it usually has a sharp outer edge, but for ceremonial purposes, the outer edge is left blunt. It is classified as a quoit-type weapon which is thrown or hurled, either by being released after being twirled around the smooth inside edge by the forefinger (a favourite Sikh method) or released frisbee-like or discus style. It has an effective range of 40 to 50 metres.

From about the 16th century onwards, it seems to be a weapon exclusively used by the Sikh military. Used in volley fire fashion by trained footmen in the centuries before Britain imposed its rule, it continued to be a viable part of the Sikh inventory at least in part as late as the 19th century. George Cameron Stone, writing in 1934 of a Sikh military exhibition he had witnessed many years prior, described the skilled use of the weapon from a distance of 50 metres, where trained warriors struck an archery-like target and usually hit their mark.

Centuries before powered flight, the Sikhs had a thorough understanding of the basic airfoil. In fact, all the chakrams I have been able to handle have had a flat bottom and asymmetric curved top, which is another key airfoil feature. As air rushes past the chakkram, the air flowing over the curved top must travel farther and faster than the air under the flat bottom, thereby creating a partial vacuum or area of low pressure which lifts the device. The high rate of spin capable with the aerobie/chakram makes for a very stable flight. Between battles an experienced thrower could even bend or warp each disk to zero in on a target.

Where would one store his supply of Chakras

This Nihang turban is made of wicker covered with cotton in a form resembling the high turbans worn by Akali Sikhs, this example in the Victoria & Albert Museum in London was probably for ceremonial use as it is thought to be to tall and unbalanced for use in actual combat. The weaponry on the turban includes a central ornament of crescents, surrounded by gold-overlaid throwing chakkars or chakras. The inset of a painting of Baba Deep Singh shows a similar turban without the wicker support. Several chakras are visible stored on the turban. 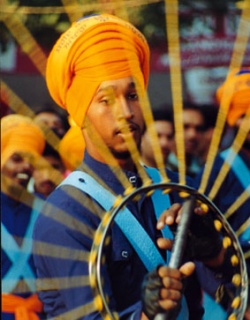 Gatka demonstration where a Sikh spins the Chakar.

The vadda Chakar or the "big wheel" looks like a wagon wheel with weights at the end of each spoke. In battle the ends of the spokes carry sharp cutting blades. The chakar is wielded by grasping the centre and spinning it around, causing damage upon anyone coming too close to the spinning weights or blades. The wheel when in full motion presents a very dangerous weapon to approach. The operator is also able to throw this into the enemy causing widespread damage.