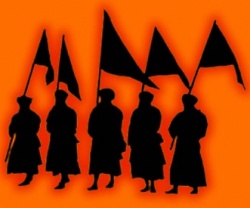 The caste system or caste inequality is the name given to a system of discrimination (known as casteism) that has been practised in India for 1000s of years. It is similar to any other system of discrimination in that it involves giving different rights to people of different background. In this case, it involves the social stratification and social restrictions of different tribes and sects within the Indian subcontinent, in which social classes are defined by thousands of endogamous hereditary groups, often termed as "jatis" or "castes".

It is a form of systematic discrimination just like racism or race inequality: which is discrimination based on the persons race or ethnicity. In the West, before the 19th century, the evil of racism led to the organised trade in slaves and resulted in the huge amount of misery to the peoples of Africa.

Although the caste system is generally identified with Hinduism, it was also observed among followers of other religions in the Indian subcontinent, including some groups of Muslims and Christians. The Indian Constitution has outlawed caste-based discrimination, in keeping with the socialist, secular, democratic principles that founded the nation. Caste barriers have mostly broken down in large cities, though they persist in rural areas of the country. Nevertheless, the caste system, in various forms, continues to survive in modern India and elsewhere strengthened by a combination of unchanging social perceptions and warped cultural practises.

The situation in the West is not a lot better either! The iniquity of racism in the West resulted in many evils in this society. The end of the slave trade did not bring an end to this horrible practise. Apartheid and the segregation of different races continued well into the 20th century. Black and brown races were not allowed to openly share in the society's resources until the 1950s. Unfortunately, forms of discrimination in modern society have continued well into the present.

It is well known that the Sikh Gurus first preached the message of non-discrimination and equality many 100s of years ago. Since about 1499, when Guru Nanak began the first of his five world tours to spread the message of peace and compassion, there has been a very clear voice against caste, race and gender discrimination. From 1500, the world has known that to discriminate based on the person's caste, race or gender is wrong; this knowledge has been around for all of the world to learn and embrace. The Guru Granth Sahib records the actual words of Guru Nanak in Raag Asa on page 349 thus:

For a Sikh, the Guru word and hukam (or edict) are very clear. To discriminate against any person and to favour someone indiscriminately is not acceptable. Although, the message of non-discrimination has been spelt very clearly, we continue to live in ignorance. The results of our ignorance and the evidence of our discrimination can be seen everywhere around us.

What the Guru taught the world

During the time of the tenth Sikh Guru, Guru Gobind Singh, the panj pyara were created. These five were the leaders of the sangat (congregation) and in 1699 became the first members of the Khalsa fraternity. The Panj Piare (literally the five beloved ones), were named: Bhai Daya Singh, Bhai Dharam Singh, Bhai Himmat Singh, Bhai Mukham Singh and Bhai Sahib Singh. Their castes were: Khatr’i or shopkeeper, ’Jatt’ or farmer, ’Chhimba’ or washerman, ’Ghumar’ or water-carrier, and a Nai or barber. If we look at the caste of each of them, it was different; they were all from 5 different and varying castes. From this it can be seen that the there was no discrimination within the sangat during the time of the tenth Guru; all castes were allowed equally to take part in all the events; the sangat was homogeneous and a cross section of the wider society; all were represented. All were able to take part in this most holy of rituals that were organised.

Further, if we look back during the reign of the previous 9 Gurus, you see the important role played by various different castes and sects. Guru Nanak's companion, Bhai Mardana was regarded by the Hindu society as a lower caste Muslim. The person who discovered the ninth Guru Guru Tegh Bahadur was Bhai Makhan Shah who was a Labana. Baba Buddha, who lived to the ripe age of 125 years and had the good fortune of the darshan (sight or company) of 6 Gurus, was a Jatt by caste. So all castes played equal roles in Sikhism during the times of the Gurus.

How are we behaving?

Now, if we look at the important Sikh organisation of today, it is clear that the same non-discriminatory policy does not appear to apply. Although, the Sikhs continue to assert that there is no discrimination based on caste, creed or race, it is clear that this position is not tenable. If we look at the top five officials of the SGPC over the last 25 years, it becomes clear that even the "top brass" in the Sikh institution do not practise what was preached by our Gurus. The "lower-castes" have had no proportional representation on these elite institutions during recent times. The fact that lower caste officials do not become the presidents or vice-presidents or secretaries of SGPC and other elite Sikh organisation on a regular basis must tell a story about the way the top Sikh institutions function. If there was no discrimination, then the lower caste who are the biggest in number, must occupy top jobs in these organisations.

Now look at the local Gurdwara management committees, it is found that the top five officials within these groups are not from different castes or sects but predominately from one or two sects. The fact that we do not encourage different castes and sects into the top job in Gurdwara committees points to the fact that we are not paying heed to the Guru's message. Let us all read and follow Gurbani otherwise, our time on this planet will be wasted.

Let us also look within our own individual minds and see if we are following the words of the Guru. Do we really accept everyone as equal or do we regard people of our sect as superior in some form; do we discriminate against certain types of castes or social groups or races? Look deep! Don't kid yourself because the Lord will know your real position! Let us all make amends and truly accept the whole of the human race as one! Also, do we raise our voice against the discrimination that is taking place around us. If not, then we need to change and raise our voice just like our Gurus have asked us to!

Main article: Recognize the human race as one