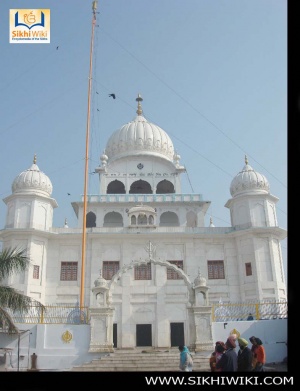 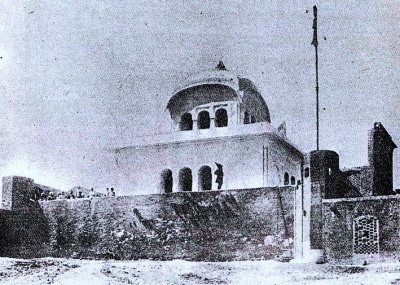 File:Original Kachi Garhi, from the time of the tenth Master, In Chamkaur Sahib, Circa 1901-1930.jpg

Gurdwara Garhi Sahib is situated in Chamkaur Sahib. The place commemorates the spot of the bloody battle of Chamkaur. After the attack at the river Sarsa, Guru Gobind Singh, his two eldest sons and 40 Sikhs made it to the town of Chamkaur while being pursued by an army of 1,000's. Guru Gobind Singh and the 40 Sikhs sought shelter in a mud-built double story house. They were attacked by the enemy on December 21, 1705.

Against these overwhelming odds, the Sikhs ventured our in small groups to fight the enemy and bravely lay down their lives. Thirty Seven Sikhs were martyred that day including Guru Gobind Singhs two eldest sons as well as three of the Five Beloved Ones (the first baptized Khalsa).

Guru asked to leave the "fort" 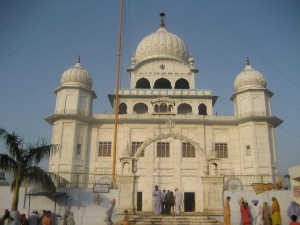 Monuments of Guru Gobind Singh’s time no longer there 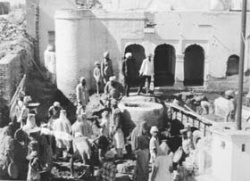 When lakhs of Sikhs from across the globe will congregate here tomorrow to pay tributes to the two elder Sahibzadas of Guru Gobind Singh and other “Singhs” on the historic occasion of the 300th anniversary of their martyrdom, they will also come to know how the SGPC has wiped out the great historical monuments associated with the wars fought by the Guru, his Sahibzadas and followers. Thousands of Sikhs have already reached here.

All historical buildings, including Chamkaur-de-Garhi, also famed as Kachhi Garhi, from where Guru Gobind Singh, his two elder Sahibzadas and other “Singhs” fought a great war against the armies of Turks and Pahari Rajas (Rulers of hill states), have been removed from the scene over the years. They have been replaced by modern Gurdwaras made of marble.

Many of the Sikhs turning up here will like to see the original Garhi (fortress) but it will be a disappointing moment for them when they will not be able to see such a structure in the town where Guru Gobind Singh spent two most crucial days — December 20 and 21 in 1704 — of his life. There is also no trace of the war field where the battle was actually fought as Gurdwara Katalgarh Sahib has come up there. Some say that instead of Katalgarh Sahib, it should be named as Gurdwara Shaheedan.

No trace of the original history of the Guru’s period has been left by those who were made the custodians of the Sikh heritage. All old buildings surrounding the original Garhi have also been demolished to build a new gurdwara. “Future generations would never forgive those who have played havoc with the Sikh heritage,” says a Sikh historian.

The Garhi belonged to Rai Sahib Chaudhary Roop Chand and his brother Chaudhary Jagat Singh. They were Rajputs, who migrated from Amber near Jaipur in 1134. Their elders were granted rights over 65 villages in the Chamkaur Sahib belt by rulers of that time.

After marching out from the Anandpur Sahib fort, Guru Gobind Singh arrived at Chamkaur Sahib on December 20, 1704, and camped in a bagh (garden) that belonged to the Chaudhary family. At that place now, Gurdwara Dumdama Sahib has been built. From the bagh, the Guru and his men shifted to the Garhi to launch a counter attack on the invading armies of Turks and hill states. In the war, that continued for two days, the two elder Sahibzadas — Ajit Singh (16) and Jujhar Singh (14) — attained martyrdom along with three — Bhai Mohkam Singh, Bhai Himmat Singh and Bhai Sahib Singh — of the famed Panj Piaras.

Chaudhary Mohinder Singh and other members of his family say that their forefathers had helped the Guru and his followers to shift to the Garhi despite the fact that they were under pressure from the rulers of that time. “Historians have not done justice with our elders and a wrong picture has been painted of them,” they say. Chaudharys lost the ownership of 65 villages in 1852 when the land of these villages was allotted to muhjaras (serfs) by an officer, Kala Rai. But this town even now has a significant presence of the Chaudhary families.