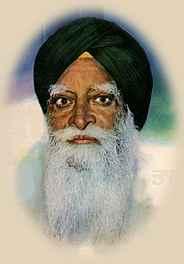 Born at village Mulla Hamza in Montgomery District (now in Pakistan) in 1900 A.D., Bhai Samund Singh was given training in music by his father Bhai Hazur Singh Ji from his early child-hood. As a little boy he won a number of prizes and distinctions at musical concerts. He came to be known as 'Kaka Samund Singh' and was much in demand at Sikh congregations. His Jatha (party) came to be known as the best in the understanding of their art and almost perfect in presentation of Gurbani Kirtan. With his unique melodious voice, an extensive and deep understanding of Gurbani, correct interpretation of ragas, attractive style of singing and great human qualities, he reigned supreme for sixty years in the world of Gurbani Kirtan. He performed kirtan at the Gurdwara Janam asthan, Sri Nankana Sahib, the birth place of Guru Nanak Dev, for many years. He broadcast kirtan for 36 years from All India Radio, Lahore and later from Jalandhar and commanded wide listening. Passers-by stopped in the streets to listen to his kirtan irrespective of their faith. He was invited to perform kirtan in the National Programme of Music by All India Radio, the highest recognition of his art. He was given State award by the Punjab Government in 1971. A few months later he passed away at Ludhiana on 5th January, 1972.

According to the author of the Sikh Sacred Music, "Bhai Samund Singh is the most eminent Ragi (Singer) in the Punjab. His forefathers were honoured Ragis at Nankana Sahib for five generations. He sings in simplified classical mould and balances the emotional effect of the music with the spiritual appeal of the word by repeating the phrases with subtle variations. He has a melodious voice of considerable flexibility. His rendering of shabads excels in lyrical refinement. He sings in medium tempo, creating the illusion of a placid flow of a stream."

He lived a simple life of a true devotee. It was his firm belief that the sacred music sung by a 'Ragi' must flow from a heart purified by practical life of simplicity restraint & constant meditation.

He will be remembered for a long time for his unrivalled qualities as a musician and scholar of Gurbani Sangeet.