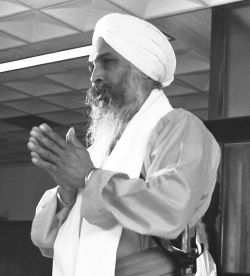 Later, Bhai Sahib Ji moved to Singapore where he met Sant Baba Sohan Singh Ji and lived a life of hard work, devotion and tireless service to the Sangat. In the late 1960’s Bhai Sahib Ji travelled to England where he was to fulfil his divine mission and meet Sant Baba Puran Singh Ji in 1968.

Through the tireless efforts of Baba Ji and Bhai Sahib Ji, the vital religious programmers encouraged individuals not to give up their religious beliefs but instead to look upon their Sikh heritage as a source of strength.

During the period from 1968 to 1977 many gatherings or Smagams were organised where the message of Gurbani was contemplated upon by the Sangat (holy congregation) with Amrit Sanchars taking place at the end of all the main events.

1977 saw the opening of the Jatha’s first Gurdwara at 18-20 Soho Road, Birmingham. Here the Jatha’s key motto based on Nishkam Sewa (service without a desire for personal gain) was put into action.

In addition, the Jatha provided humanitarian aid to diverse groups regardless of their religious background. Major natural disaster appeals such as the Ethiopian Famine appeal, earthquake appeal, Bangladesh Flood appeal and Rwanda Crisis appeals have all benefited from the Jatha's donations, as have local hospitals and schools.

During the economic recessions of the 1970’s and 1980’s Baba Ji set up a ‘Co-operative’ Commercial Enterprise – Marg Sat Santokh Manufacturing Limited (MSS) as an example of self help community co-operation to provide employment. The workshop and retail outlet was a novel idea to cater for the employment needs of the local Sikhs. The project provided work for many Sikhs who would otherwise have been unemployed.

So Baba ji and Bhai Sahib ji established "new ideas and practises" to further the principles of the Sikh Gurus who had always provided for the well being of the Sikhs.

In After 1983 Bhai Sahib Ji continued Baba Ji’s mission and ensuring that no changes occurred in the high ideals and standards set by Baba Ji. This ensured the Jatha's growth based on the fundamental pillars of “Simran and Sewa.”

Bhai Sahib Ji initiated and oversaw the building of the Gurdwara at Gura, Baba Ji’s birthplace. During the period 1992-1995, over 40 different construction and relief projects in India were funded by the Jatha.

Bhai Sahib Ji initiated and commenced the building of the Jatha’s Asthan at Anandpur Sahib in 1994.

Bhai Sahib Ji visited the Golden Temple in early 1994 and realized that repair of the Darbar Sahib was urgently needed. After exhaustive scrutiny and in recognition of its high ideals, it’s strictly non political nature and it’s excellent record of achievements, The Shiromani Gurdwara Prabandhak Committee bestowed the sacred ‘Kar Sewa’ of the restoration of the Golden Temple to the Jatha in 1994.

Thus, enabling the Sikh Diaspora to partake in the only Kar Sewa of the Holiest shrine of the Sikhs, since the time of Maharaja Ranjit Singh Ji.

On 3rd February 1995 the historic Kar Sewa to renovate and refurbish the Sri Harimandir Sahib, Amritsar along with the Darshani Deori was begun at a special ceremony at the Akal Takth. Bhai Sahib Ji saw to the completion of the work on the exterior of the Golden Dome and even fitted the new Golden Kals with his own hands in June 1995.