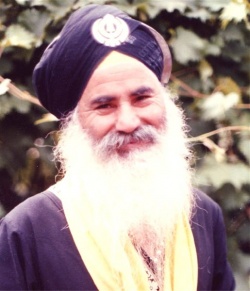 BUMPING INTO A MONA

One evening, we had just finished doing kirtan at Gurdwara Singh Sabha, Slough. A Singh phoned and said he had booked kirtan in Hounslow, and we should come straight away. Bhai sahib said, "Lets go quickly, we should always be on time".

As Bhai Jeevan Singh sahib, his singhni (wife), myself and another youth walked downstairs into the joorian (shoes) section. A mona (man with hair cut) was walking in to the Gurdwara. Accidentally, he bumped into Bhai sahib. He said "sorry," and looked in to Bhai sahib's face. Those who know Bhai sahib know how enigmatic his smile is, and how his face always shone.

Bhai sahib said to him, "I came here especially to see you, I have something for you." Bhai sahib then took off his dastaar (turban) and handed it to the youth. The mona youth could not believe his eyes; Bhai sahib said these words to him with so much honesty, pyaar (lovingness) and humility.

From that day on, that once "mona" Sikh kept his kesh and came into Sikhi.....

When Professor Manjit Singh was the Jathedar {leader) of the Akal Takhat Sahib. He called a World Sikh Smellan (gathering, conference), which is basically a union of "Sarbat khalsa". Every Gurdwara, Sikh group and jatha from around the world was invited and many days were spent discussing Panthik (concerning the Sikh path or Panth) issues at the Siri Akal thakht sahib. All Panthik matters were discussed. Thousands of Sikhs gathered, including all the luminaries of the Panth.

Many people such as political leaders were centred on themselves and wanted special treatment, but everyone was treated equally. No dignitary received special attention. However for some reason the Panj Jathedars of the five Takhats sat on a sofa in the complex where this was happening. (I saw a picture of it in The Spokesman).

As days of the veechars happened everyone gave their views on many subjects, from rehit to khalistan. Professor Manjit Singh wanted to get this vision of the World Sikh Council passed.

As the A-Z of Sikh leadership and intelligentsia sat in the sangat on the floor. A simple Gursikh walked into the complex building. He walked in humbly and did mattha tekked, and went to sit in the sangat. However straight away, the Jathedars got up and ran over to him, and said to him, he must sit on the sofa. Totally embarrassed he refused. But they brought him over and sat him on the sofa. He sat uncomfortably because he was not one for that kind of attention.

That Gursikh was Bhai Jeevan Singh. That picture, too, came in the Spokesman. It goes to show how highly Bhai sahib, his jeevan, his seva, and his nimarta is respected in the Panth, that only he was singled out for such attention.

It is the virtues of Guru, such a pure humility, that pulls at peoples hearts.

I attended Toronto Smagam (Sikh gathering) some years back. A few other young Gursikhs from UK also attended.

Bhai sahib was at the Smagam, with many other 'special' Gursikhs, all singing Guru ji's bani, in Guru ji's supreme presence. It was such a wonderful experience.

The day that we arrived, in the evening, we attended the kirtan. After the kirtan, the members of the sangat were just mingling with each other, but Bhai sahib, as always, was the centre of attention. People wanted to talk to him and take pictures with him.

Suddenly Bhai sahib came up to me and said fateh, and hugged me with his enigmatic smile. Another Singh had a camera, and said to Bhai sahib, "I want to take your picture". Bhai sahib said to him, "take my picture with these Gursikhs".

On the opposite side of the room was a young Gursikh that I know who is always quite humble. He rarely comes to the foreground. In his mind, he told me later, he thought, I wish I could have my picture taken with Bhai sahib. I wish he would notice me as well.

Bhai sahib straight away left us and walked swiftly over to him, and said to the photographer, "Singh take one more with this Gursikh as well". The youth could not believe it, Bhai Sahib smiled at him.

The Gursikh was overwhelmed after wards when speaking to us, and almost came to tears as he explained his emotions.

This is the thing about a jeevanwale Gursikh. It is the small things that they use to bring so much joy to people in their lives.

After I had taken Amrit for about a year, my Amritvela (habit to getting up early) started getting slack. I used to do Amritvela with Bhai Saun Singh and Bhai Malkit Singh regularly at Bhai Saun Singh ji's house. However, I had stopped being as regular as before.

One day, early in the morning at amritvela, I was asleep. My father was at work on the night shift and my mother was up doing her paath when suddenly the phone rang. It was Bhai Sahib phoning from Canada. My mother picked it up.

Bhai sahib said, "Is bhaji there?" Mother replied, "No, Bhai sahib, he is at night shift." Bhai sahib replied, "No, I am not talking about Pita ji. Is Bhaji there." (bhai sahib always makes himself out to be the youngest, such is his humility)

My mother came upstairs and woke me up, saying it is Bhai sahib phoning. I got up and quickly ran downstairs.

I said fateh on the phone.

Bhai sahib replied with Fateh, then said, "Bhai ji, you have not mercy on me today, it is Amritvela, and you forgot to wake me."

There was a silence…

Honestly, never have I ever ever felt so embarrassed for missing Amritvela.

Me and my mother looked at each other wondering how Bhai sahib in Canada knew that I had, that day, forgotten to get up at Amritvela, here in UK. 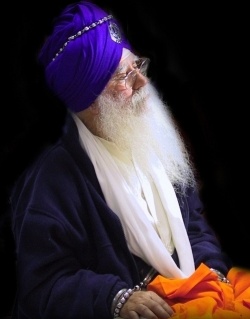 When Operation Blue Star happened in India, a year later a big march was organized (an annual event) in Washington, DC. All the "leaders" made big speeches. Bhai Saheb Jee was invited to the podium. At the US Capitol steps he said calculated words, "Khalistaan Mangan Vaaleyo, Khalsey Bano!" 'nuff said!

Bhai Saheb had a hernia problem and had it operated on. It turned out to be a major procedure. He came from the hospital to stay at my parents place. He was in pretty bad shape, medically speaking. We assisted him upstairs to a comfortable room. In the evening, we had scheduled a kirtan program. Everyone asked him not to come downstairs. He did not listen. He walked down on his own, bowed to saadh sangat and sat upright to listen to GurBaani Keertan. During that stay, his routine did not change from that used whenever he had stayed with us when in good health. Amrit Veylaa Naam Daan Ishnaan continued.

I once noticed a lovely kirpan on his person. I have always known not to compliment anything on Bhai Saheb Jee's person because he will give it to you. I don't know how it slipped off, but it was a very lovely little kirpan. Immediately, he gave it to me. Later he did say that it was a special gift to him from "santaa to(n)." I can only imagine who the original donor was. He asked me to not keep it as a keepsake, but to wear it. I am not worthy. Over the many years, I have received many things external and internal from Bhai Saheb Jee that will stay with me as long as this body survives.

Bhai Saheb Jee, the silent one:

I went to pick him up at the airport and on the way home I asked him the meanings of a line from GurBaani. He said, do you have a tape player in this car? I said no (it was long time ago, okay!). He said he will buy me one (he still owes me that one LOL!!!). But nothing else was said. I looked at him. He closed his eyes and just bowed his head. I had hung around him enough to know not say a peep.

Evening came and kirtan was started. I always had the honour of tabley di sevaa. All the questions were answered that evening. That day I learned, that it is GurBaani that has all the answers.

Once a phone call arrived, Bhai Saheb Jee knew who it was. He picked up the phone and let out a high-pitched gurrrrrrrrr. If there was any reminence of five dushts in that room, they were now gone! It was Bhai Saheb Jee's Naam Khandaa he had stirred in the virtual company of another Naamee! Another phone call - Bhai Saheb Jee answered himself. He opened by saying, "mai tuhaadey pair chatdaa(n)." And he proceeded to pass kisses across the phone line...